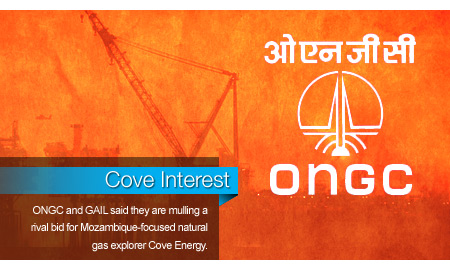 LONDON - India's state-run Oil and Natural Gas Corp. and GAIL (India) Ltd., a state-owned natural gas processing and distribution company, said Tuesday they are mulling a rival bid for Mozambique-focused natural gas explorer Cove Energy PLC, but have yet to decide whether to make a formal offer for the UK-listed company.

Responding to an Indian media report that the two firms would top a $1.77 billion bid by Thai state-owned oil and gas group PTT, as well as Royal Dutch Shell PLC's $1.60 billion offer, ONGC and Gail delivered a short statement confirming that they are participating in the sale process announced by Cove last month.

ONGC Videsh Ltd., the overseas investment arm of oil explorer and producer ONGC, and GAIL, may value Cove at 245 pence a share, the Times of India newspaper reported, citing people familiar with the situation. A bid of that size would represent an 11% premium to PTT's offer Friday, and translate into a $2 billion deal for the company.

Interest in Cove, a modestly sized exploration company listed on London's junior exchange, has been fueled by the access it enjoys to one of the world's most promising gas areas. With its main asset an 8.5% stake in a gas field offshore Mozambique owned and operated by Anadarko Petroleum Corp., buying Cove is a speedy way for energy firms to get a foothold in the region.

Anglo-Dutch major Shell Wednesday announced it would offer $1.6 billion for Cove, a move hailed by analysts as a logical step for the world's biggest shipper of liquefied natural gas. With Anadarko having raised its estimate for how much gas is contained in the Rovuma field to 30 trillion cubic feet and nearby finds by Italy's Eni SpA potentially holding twice that amount, there could be enough gas to justify the construction of an LNG facility to supply nearby Asian markets.

There is already an Indian presence in the Rovuma block, with Bharat Petroleum Corp. Ltd. and Videocon Industries Ltd. each holding a 10% interest in the license.

Cove, which started as a platinum and nickel explorer in 2003 before switching attention to oil and gas three years ago, bought its Tanzania and Mozambique assets from Artumas Group for $3.3 million in 2009.

Standard Chartered Bank is advising Cove, while Bank of America Merrill Lynch is acting on behalf of the consortium.

Any sale will require the approval of the Mozambique's government.