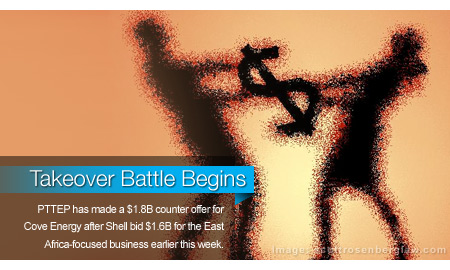 A takeover battle has begun for Cove Energy after the firm received a bid approach Friday to rival that made by Royal Dutch Shell on Wednesday this week.

In a statement to the London Stock Exchange on Friday afternoon UK time, PTTEP said that it would offer $1.77 billion (GBP 1.12 billion) for Cove – a premium of some $200 million on Shell's offer of $1.57 billion.

Shell said on Wednesday that its decision to buy Cove fits with its strategy to drive forward with its investment program and that it sees East Africa as a "major prospective hydrocarbon province". The Anglo-Dutch oil major already has interests in Tanzania. The acquisition of Cove would mark Shell's entry into exciting new hydrocarbon provinces in Kenya and Mozambique with significant potential for new LNG (liquefied natural gas) from recent gas discoveries offshore Mozambique, said the firm.

In Mozambique, the Rovuma offshore basin – where Cove is active with its partner Anadarko – is a frontier exploration area that holds large resources of natural gas that Shell believes are suitable for LNG projects. According to Cove, this play represents the potential for more than 30 trillion cubic feet of gas and six LNG trains, while Shell said it understands that bringing these resources on stream is a strategic priority for the government of Mozambique.

Friday's offer from PTTEP has thrown a spotlight on East Africa as oil majors and national oil companies line up to capitalize on the region's gas resources.

PTTEP said that it is "dedicated to using its extensive experience in building a natural gas-based economy for the benefit of Mozambique and its people and would like to highlight its full support for the construction of a world scale LNG facility making use of the 30-plus tcf of natural gas resources in Area I of the Rovuma basin and to support Mozambique in creating a leading natural gas based economy".

On Wednesday, London-based investment bank Westhouse Securities predicted that while Shell's move would likely preclude other majors from making a bid for Cove, it did not rule out a counter offer from one of a handful of state-linked oil companies.