Shell to Expand LNG Portfolio with $1.6B East African Acquisition 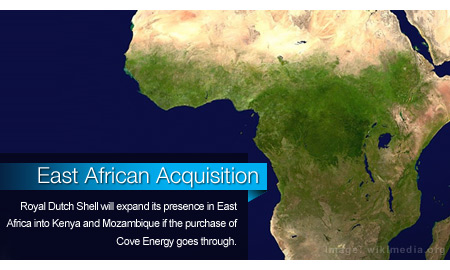 The news comes after Cove announced Tuesday that it and its partner Anadarko had discovered further natural gas in the Lagosta field in Mozambique's offshore Rovuma Basin.
Shell said that its decision to buy Cove fits with its strategy to drive forward with its investment program and that it sees East Africa as a "major prospective hydrocarbon province". The Anglo-Dutch oil major already has interests in Tanzania, and the acquisition of Cove would mark Shell's entry into exciting new hydrocarbon provinces in Kenya and Mozambique, with significant potential for new LNG (liquefied natural gas) from recent gas discoveries offshore Mozambique, said the firm.
In Mozambique, the Rovuma offshore basin is a frontier exploration area that holds large amounts of natural gas resources that Shell believes are suitable for LNG projects. According to Cove, this play represents the potential for more than 30 trillion cubic feet of gas and six LNG trains, while Shell said it understands that bringing these resources on stream is a strategic priority for the government of Mozambique.
Shell pointed out Wednesday that it is one of the world's largest LNG producers with one of the most diverse LNG portfolios and access to strategic global markets, with sales volumes amounting to 18.83 million tons per annum of LNG in 2011.
For its part, Cove's management team said that it believes the level and nature of the proposed offer "are such that it is in its shareholders' interests to progress matters" with Shell.
London-based investment bank Westhouse Securities said that it considers the move by Royal Dutch Shell will preclude other majors, such as ExxonMobil, from making a counter offer.
"However the state linked firms of Korea (KNOC), India (GAIL), and China (CNOOC and/or others) might consider making a higher bid," said oil sector analysts at the bank. "At the end it will probably come down to which party can gain the backing of the Mozambique government."
Shell's offer for Alternative Investment Market-quoted Cove follows a report earlier this week by UK accountancy firm Ernst & Young that warned junior oil and gas companies remain vulnerable to takeovers from majors due to ever-tightening credit markets.
Westhouse backed this view by commenting that Wednesday's news shows that "large cash rich companies are clearly taking advantage of the fact that on current valuations it is clearly cheaper to buy reserves through the stock market than to explore".
Tweet