UT: No Evidence of Groundwater Contamination from Hydraulic Fracturing 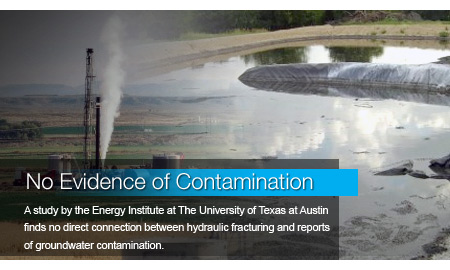 No direct connection has been found between hydraulic fracturing and reports of groundwater contamination, according to a study released Thursday by the Energy Institute at The University of Texas of Austin.

The study found that many of the problems linked to hydraulic fracturing are related to common oil and gas drilling operations such as casing failures or poor cement jobs.

Researchers also concluded that many reports of contamination can be traced to above-ground split or other mishandling of wastewater produced from shale gas drilling, rather than hydraulic fracturing per se, said Charles "Chip" Groat, an Energy Institute associate director who led the project.

"These problems are not unique to hydraulic fracturing," Groat said in a statement.

The study found that gas detected in water wells in some shale areas such as the Marcellus could be traced to natural sources and was likely present before shale operations began.

In April, the institute will begin a detailed case study focusing on claims of groundwater contamination in the Barnett shale. Researchers will study site preparation, drilling, production and handling and disposal of flowback water, and also will identify and document activities not related to shale development that have resulted in water contamination. The quantity of fresh groundwater used in shale development and evaluate ways to reduce the amount of water used also will be examined.

A second project under development would include a field and laboratory investigation into whether hydrological connectivity exists between water in the units above and below the shale unit being fractured in the fracturing process; this study also will focus on the Barnett shale.

The study's findings were released in Vancouver, British Columbia, at the annual meeting of the American Association for the Advancement of Science.

Andrea  |  February 21, 2012
I agree that most contimination areas such as the current issue in Wyoming can be attributed to years of reckless drilling and lack of knowledge and scientific advancements that we see in todays operations!
Ayaz  |  February 21, 2012
Yes it is right that Hydraulic Fracturing does not cause surface water contamination but we have to admit that many operating companies compromise on well integrity in order to reduce the total well cost. First thing they cut major cost from is casing and cementing which is a crucial part for the well integrity, using low grade casing, poor API connections instead of premium threads, using one instead of two barriers between any water bearing zone to well bore. If we do a survey, each company will come up with few to many cases of continuous casing pressure build up and micro channels due poor cement from start or cement or casing integrity lost with passage of time. Many old wells worldwide have internal communication and well integrity issues which operating companies and government controlling authorities should pay attention to otherwise they will end up either paying more on work overs and well controlling or will do more damage to the environment.
Jubin Thomas  |  February 21, 2012
Very Good one!!!!
Gerard S. MEDAISKO  |  February 20, 2012
The Energy Institute at UT is absolutly correct. People the World over have been watching Gasland, Josh Foxs documentary, and took it for granted that shale gas had contaminated Mark Mikham drinking water, whereas Gasland does not concern shale gas at all. France went as far as banning fracking which is a stupid move, forcing its citizens to pay for gas through their nose.
Miguel Martinez  |  February 20, 2012
Great article presenting correct facts! The public misperception that frac water has contaminated water supplies has been amplified by false accusations from uninformed media. Facts are never actually taken into consideration when publishing many other articles, as they are not "interesting" enough stories to sell. It great to see the Energy Institute at UT perform and document research that shows proof of findings against blatantly wrong accusations of frac water contamination.