Ex-BP Safety Chairman To Quit Board 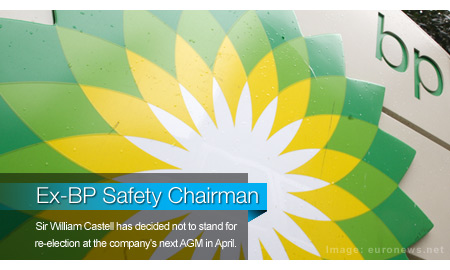 LONDON - The BP PLC director who became a lightning rod for investor criticism of the company's handling of the Gulf of Mexico oil spill has indicated he will step down from his post.

Sir William Castell, whose reappointment as chairman of BP's safety and ethics committee was opposed by a quarter of shareholders at BP's last annual general meeting, has decided not to stand for re-election at the company's next AGM in April.

In December, he handed over the role at the helm of the safety committee to Paul Anderson.

Last year's fractious meeting was the first time BP had come face-to-face with shareholders since the Deepwater Horizon drilling rig exploded, killing 11 men and setting off the worst offshore oil spill in U.S. history. Some institutional investors, including two of the biggest pension funds in the U.S., Calpers and its Florida-based peer SBA, opposed management on Castell's reappointment.

BP Chairman Carl-Henric Svanberg said: "The last two years have been a difficult time for BP. Bill has devoted all the time that was asked of him and more in the service of the board and the company. I speak for the whole board when I thank him sincerely for all that he has done."

A civil trial to determine how blame is to be divided among the companies involved in the Deepwater Horizon disaster is set to begin Feb. 27 in New Orleans.

BP dismissed out of hand suggestions that Castell's decision to sever ties with the company was in any way related to the upcoming trial. "He has served on the board for a remarkable length of time. It was his own decision to take and represents the logical end of a directorship cycle," said a BP spokeswoman.

SBA welcomed the move. Michael McCauley, SBA senior officer investment programs & governance, said: "This should be a positive step forward for the board. The new director has a specialized background in the industry, and should add value."

Phillip Juranek  |  February 06, 2012
I retired after 33 yrs. with BP, they are a great company to work for, their committment to safety is second to none, but there are too many people in positions they are not qualified for. BP needs to find people with common sense and experience in the job they are doing.
hosein-davodi  |  February 06, 2012
Although the experience and seince of Sir William castell is very important & valueable, but the disaster (Gulf Mexico oil spill)was a catastrophic for all oil industry in the world and it had a very negative effect on them.I thinlk,the global oil industry generaly and BP company specially needs a practitioner and front-line manager till reflex urgently against these disaster.Unfortunately,the incidents & accidents of BP company ,is relatively high and must review all of its principals and regulations.Thanks and regards.
Jack Satterfield  |  February 03, 2012
Lets get real and to the point this 1/4 of the shareholders against him. Why must we be politically correct and call it as it is?
RELATED COMPANIES
Company: BP plc more info