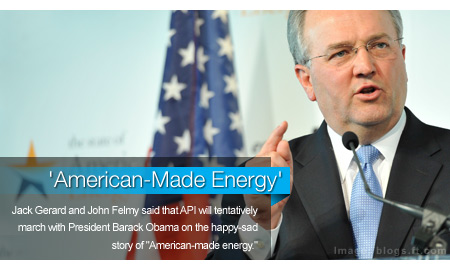 In a tele-call press conference on Tuesday morning, API made some of the following key points:

Here are some "fuel for thought" verbatim quotes and statistics from API etc.:

Based on this writer's extensive coverage of energy + economic policy debates since 1976, here are some other significant trends to watch in the 2012 election:

Rather, API said that it will be going directly to "We the People of the United States of America," with vote4energy.org, an Internet educational campaign, among other things.

It ought to be an interesting and informative election year, anyway.

Joel Warthen  |  January 25, 2012
It seems that API is being rather timid and hedging their bets by not supporting or opposing Obama. They have arguments that are sufficient to convince but they don't want to use them. Why? I think that we have not been made privy to the whole story!
Barbara Saunders  |  January 25, 2012
Right on Steve. Me thinks the Big Discussion is coming, whether API joins the renewable parts or not. Rigzone sure is though. See coverage of Obamas State of the Union speech and more to come!
Barbara Saunders  |  January 24, 2012
Thanks, Ken. The audio on this end and @ API went soft at 1.4 million (Wood MacKenzie.) Uncharacteristically, API did not have formal, printed statements till later Oilblur, of course hes a career politician. I don't think he went exactly "pro O/G" but pro-jobs. Yet then, how many of us are "anti-jobs?"
Steve  |  January 24, 2012
Its time for the API to integrate with a National Energy Plan. Such noted "liberals" such as Mr. Pickens put forth a reasonable plan to substitute domestic gas for imported oil in the transportation sector and connecting Wind Farms to an improved National Smart Grid. The Wind Energy would replace the natural gas diverted from electricity generation. Its time to come together. This is but one example. Let us support a non-partisan national discussion for growth, jobs and the environment. It is possible. Lets GO!!!
Oilblur  |  January 24, 2012
Ummm......psssst. Obama is a career politician thus he will promise anyone anything to get elected. He already has broken promises from 2008 still lingering. He is the most anti-capitalism, anti-energy President this country has seen so energy Execs. would be smart to not fall for Obamas political re-election tactics. He is suddenly pro-US Oil and Gas Industry........ yea right.
Ken  |  January 24, 2012
Wow. A billion more jobs? Just wow.
RELATED COMPANIES
Company: American Petroleum Institute (API) more info