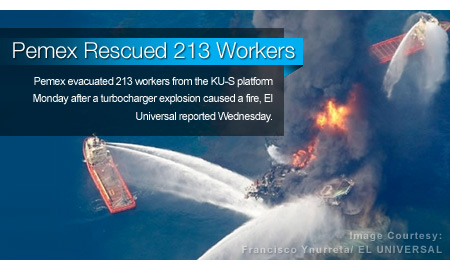 Petroleos Mexicanos (Pemex) evacuated 213 workers from the KU-S platform in the Ku Maloob Zaap field Monday after a turbocharger explosion caused a fire, El Universal reported Wednesday. No injuries have been reported among the workers.

Pemex has shut in production from the platform. The Ku Maloob Zaap field is located 65 miles (104.61 kilometers) northwest of Ciudad del Carmen in the Bay of Campeche. Water depth at the field is estimated at 330 feet (100.58 meters).

Ku-Maloob-Zaap is Mexico's largest oil producing field, and has been the largest source of new production growth in the past few years. Located adjacent to the Cantarell oil field, Ku-Maloob-Zaap produced 839,200 bopd in 2010, up from 808,000 bopd in 2009.

In recent years, Ku-Maloob-Zaap has surpassed the Cantarell oil field, once one of the largest oil fields in the world, in terms of production. Cantarell production has declined dramatically in the past several years, according to the U.S. Energy Information Administration.

Charlie  |  January 20, 2012
I work in the heart of this area. I see more waste there than any where else in the world I have worked. I know for a fact heads will roll there from Pemex. I bigger issue there is the gas that is being burned off daily. I have workrd there now 10 years and those 400 flair booms on all the plattforms there never go out.NEVER! I have asked 1000s of times "why not inject this gas in to depleated wells?" I have been told 1000 times its easier to burn!!!!
john  |  January 19, 2012
Investigate , resolve critical issues, lessons learned application. Dont put a moritotium on anything , just provides more beauracy, brings no value, Oops , I forgot this is Mexico not BOERME, thak goodness
Deepwater805  |  January 19, 2012
After having spent time on the Pemex platform: Chuc Bravo, I can only wonder how Pemex has managed to avoid not burning more of their rigs down.
Captain Sharad Baijal  |  January 19, 2012
excellent coverage of the O&G industrial news. Here i am more interested in the seismic survey vessel news thanx..
Gamal Jallah  |  January 19, 2012
The best thing from this accident, the effective evacuation plan for workers. The worst thing, what the reason of the explosion? I am not going away I think there was a lack of HSE performance at platform from long period? Gamal Jallah EHS Advisor - Petro-Canada,Libya
george wood  |  January 18, 2012
Great job guys, no loss of life is a big tick in the right box. A turbo charger is right out of the "blue" even with the best preventative maintenance scheme in the world. Again well done!
West Houston Geo  |  January 18, 2012
Hey, Alfredo: If you think that Mexico will stop developing their offshore resources, then you are living in a fantasy world, amigo mio. Mexico is so obsessed with their oil fields that they do not allow joint ventures with multinational oil companies. That has cost them dearly. Big Oil will not take risk without a prospect of reward, which is what Mexico asks of them. I heard all that in Mexico at a Petroleum Conference. Brazil has partnered with about every multinational you can think of and Brazil will be richer than the Saudis, very soon! West Houston Geo
Alfredo Cortez  |  January 18, 2012
My reaction now is that since giant accident in Gulf of Mexico, government agencies across the globe will look into environment issues very closely
RELATED COMPANIES
Company: Pemex more info