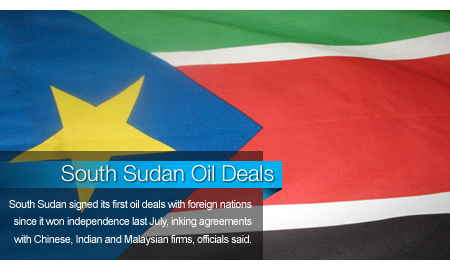 Oil revenues make up 98 percent of government budget for the world's newest nation, which split last year from former civil war enemies in north Sudan last year, taking with it some 75 percent of oil production.

The deals, which replace contracts signed with Khartoum under a unified Sudan, cover oil production in the two key petroleum states of Unity and Upper Nile.

"Now as of today, we have assured our position with our partners, that we are committed to work together to promote our interests through exploitation of the oil," Minister of Petroleum and Mining Stephen Dhieu Dau told reporters.

They included a deal for "economic and financial cooperation" as well as a training agreement between the state-run China National Petroleum Corp. and the South's oil ministry, the government website said.

Despite its oil wealth, the new state of South Sudan lacks the infrastructure to refine and export oil.

Beijing is a key ally of the Khartoum government, which has tried to offset the heavy loss of southern oil revenues by charging what Juba has described as an extortionate fee to use its infrastructure to export crude via the Red Sea.

China is supporting ongoing negotiations between the two Sudans over pipeline fees, with the next round of talks due Jan. 17.