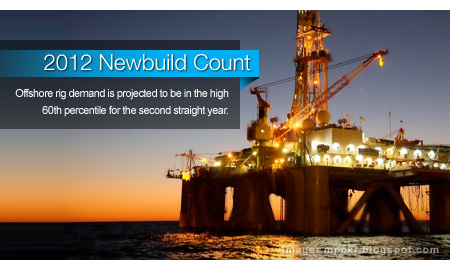 Offshore rig demand is projected to be in the high 60th percentile for the second straight year. Nevertheless, new rigs will hit the market this year to meet the demand for oil and gas exploration and production. Rig orders predominantly placed from 2008 through 2010 -- in the height of the economic downturn -- are ready for delivery over the next 12 months.

For all of 2012, there are 35 rigs ready for delivery, down 35 percent from 2011 and only 13 rigs are contracted at this time. Of the 35 newbuilds, 20 are jackups, eight are drillships and seven are semisubmersibles.

Looking at quarterly deliveries, first quarter 2012 starts strong as nine rigs are due to hit the market, followed by eight rigs in the second quarter, dropping to six rigs in the third quarter and ramping up again with 12 rigs in the fourth quarter, provided that all rigs are delivered as scheduled. It is worth noting, however, that due to likely delays in the construction process for some rigs and financing difficulties for some of the marginal owners/shipyards constructing rigs, not all of the rigs currently scheduled to hit the water this year will actually do so. 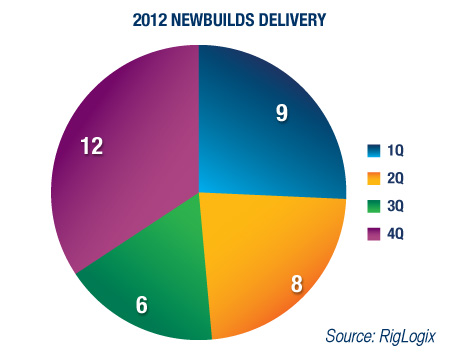 Atwood Oceanics is expecting three newbuilds this year – two jackups and one semisubmersible.

The Atwood Condor (UDW semisub) is at the Jurong shipyard in Singapore. The shipyard started construction in July 2008 and expects to be finished in June. When released for service, the semisubmersible will be capable of drilling down to 40,000 feet in up to 10,000 feet of water. Hess Corp. has contracted the Atwood Condor at a dayrate in the mid $510s through June 2014. 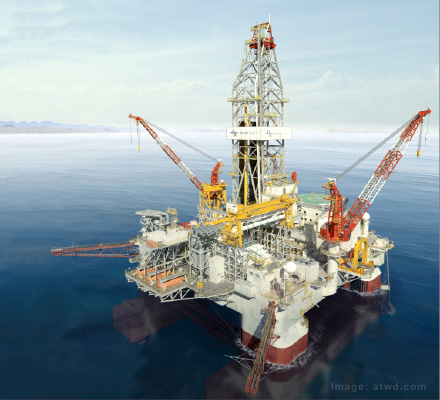 The jackup Atwood Mako (400' ILC) is at the PPL Shipyard in Singapore. The shipyard started construction on this rig in October 2010 and expects to be finished in September. The independent leg cantilever jackup will be capable of drilling down to 30,000 feet in 400 feet of water. It currently has no contract.

Identical sister rig, Atwood Manta (400' ILC), is also at the PPL Shipyard, where construction began in October 2010. The rig will be ready for service in December.

Atwood Oceanics also has two rigs due to hit the market in 2013 and one scheduled for 2014.

ENSCO has two semisubmersibles joining its fleet in March and September respectively. Both are under construction at the Keppel Shipyard in Singapore. The ENSCO 8505 (UDW semisub) is under a rig sharing contract between Anadarko, Apache and Noble from June 2012 through October 2013 at a dayrate in the mid-$470s. However, sister rig ENSCO 8506 (UDW semisub) is not yet contracted when it leaves the shipyard in September.

Neither Essar Oilfield Services jackups, which are under construction in the ABG Shipyard in India, are contracted at this time. The rigs are scheduled to be completed at the end of November.

M/S Drilling jackups 1 and 2 are also being constructed at the ABG Shipyard in India. The first jackup is due to be completed in April and the second is scheduled to leave the shipyard in October. Neither jackup is contracted at this time.

Likewise National Drilling's two unnamed jackups currently do not have a contract in place when released from the United Arab Emirates (UAE) Lamprell Shipyard – Hamriyah in April and August, respectively.

Prospector Offshore currently has six jackups under construction; two will be completed in 2012. The Dalian Shipyard in China will complete both independent leg cantilever jackups in July. Neither has a contract yet.

However, Queiroz Galvao Oleo e Gas S.A has two drillships due to leave the shipyard this year and both have contracts in place. The Amaralina Star (UDW drillship) is at the Samsung yard in South Korea through May. When it leaves the shipyard the rig will drill off Brazil for Petrobras through August at a dayrate in the low $380s. Petrobras also has contracted the Laguna Star (UDW drillship) at a dayrate in the low $380s. The rig will leave the Samsung yard in China in mid-August and fulfill its contract off Brazil through October.

Neither newbuild Seadrill jackup, due out of their respective yards in December, has a contract yet. The jackup West Telesto (400' ILC) is at the Dalian shipyard in China, and the West Tucana jackup is at the Jurong shipyard in Singapore. 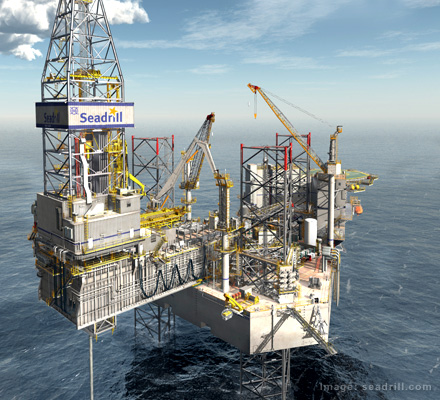 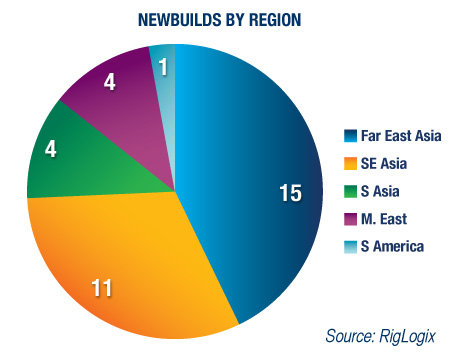 Keppel Shipyard in Southeast Asia will release five rigs from its yard in 2012 – the most of any shipyard. It will complete three jackups and two semisubmersibles. Three shipyards plan to release four rigs each. The Samsung yard in Far East Asia is scheduled to complete four drillships, ABG yard in South Asia and Lamprell in the Persian Gulf will wrap up four jackups each.

The Samsung yard in Far East Asia is constructing the Stena DrillMax ICE (UDW drillship) for about $1.15 billion, which is the highest construction cost of any rig due to be delivered this year. The rig was originally due out of the yard in 2011, but was delayed. The drillship, which is not yet contracted, is designed for harsh environments and ice infested waters and is capable of drilling in up to 10,000 feet of water and drill down 35,000 feet. 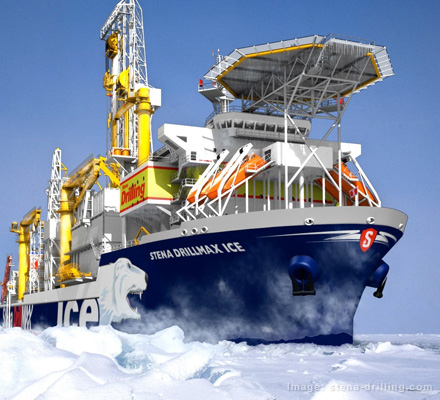 If we look at the average cost by rig type for the units delivering in 2012, drillships average about $770 million, semisubmersibles average $535 million and jackups average $195 million. The Far East will benefit most from rig construction in 2012. The region will haul in an average of $550 million per rig, and with 15 rigs due to be delivered this year, that's a nice boost to its economy. Coming in a distant second, the Southeast Asia will see about $320 million per rig.

Looking at construction time, the average for all rigs is about 3.3 years, but drillships take the longest average time to construct – 4.2 years. Semisubmersibles take about 4 years to complete and jackups take about 2.7 years from start to finish.

Two newbuilds are due out of the yard in January. Etesco's Takatsugu (UDW drillship) is rated to 10,000 feet of water. Petrobras has contracted the rig through April 2022 at a dayrate in the high $430s.

Petrobras' jackup P-59 (350' ILC) is rated for 350 feet of water and will be capable of drilling down to 30,000 feet when it leaves the Sao Roque do Paraguacu shipyard in January. Petrobras plans to employ the rig through January 2020.

As the remaining newbuilds on order leave the construction yards over the next several years, follow the initiatives of the rigs through Rigzone's RigLogix Database.