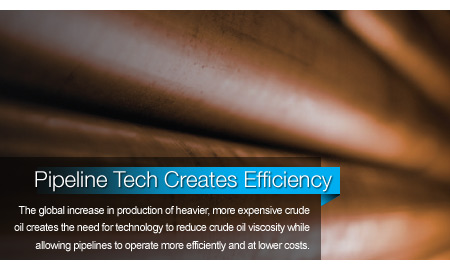 The global increase in production of heavier, more expensive crude oil has created the need for technology to reduce crude oil viscosity while allowing pipelines to operate more efficiently and at lower costs.

Save The World Air (STWA), a Santa Barbara, Calif.-based developer of energy efficiency technology, in October conducted a successful field test of its Applied Oil Technology (AOT), which reduces the viscosity of crude oil. 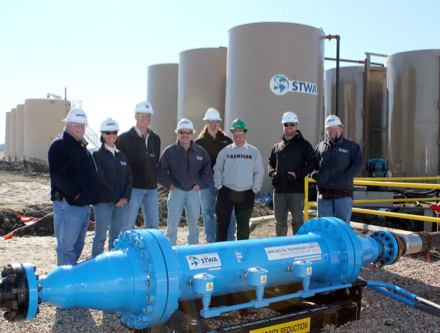 The field tests, conducted at the U.S. Department of Energy's Rocky Mountain Oilfield Testing Center near Casper, Wyo., showed that AOT delivered immediate pipeline efficiency gains of 13.14 percent to 13.55 percent when operating at one-third of its minimum power requirement.

The test results "were a big win for us," said STWA Chairman and CEO Cecil Bond Kyte, showing the technology successfully tested in the laboratories at Philadelphia-based Temple University can be implemented on a larger scale.

Adding chemical agents and polymers called drag-reducing agents is another method; however, these chemicals can be more caustic than the oil itself, required government approval for usage, and left a residual behind that required extraction, Kyte noted. Kerosene also has been utilized to thin oil in pipelines. 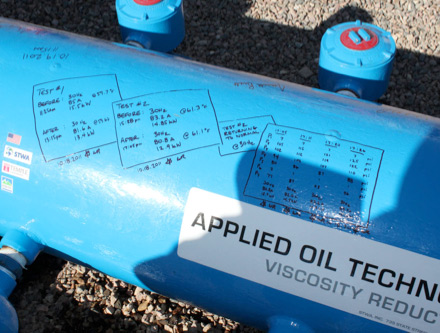 "All we're trying to solve is what people have been tackling for years" in the pursuit of reducing carrying costs while allowing oil to flow more efficiently and cutting down on the amount of power needed from pipeline pumps.

AOT doesn't alter the chemical structure of the oil itself, and initial tests have shown viscosity can be reduced up to eight hours. Other benefits of using AOT includes reduced air emissions and a low-cost system that allows pipeline operators to acquire off-the-shelf parts when replacements are needed rather than buying more costly custom parts. AOT, which is entered into a pipeline system via pumping stations, also has been designed not to interfere with pipeline maintenance.

"Pipelines come in a wide range of sizes, from two inches to 48 inches, so we developed the product so that modulars could be daisy-chained together instead of making a bunch of small to medium size units," said Simundson.

AOT can be shipped via semis trucks that meet Department of Transportation standards, and the redundancy built into the system means that oil viscosity can be still be reduced even if two or three units go out. 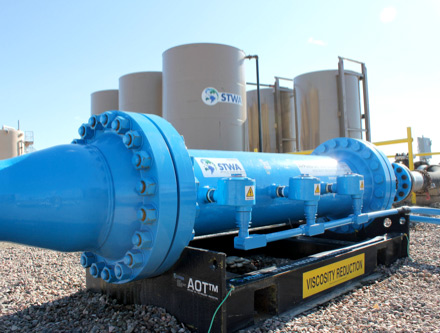 Seeking to build upon legacy technology in which magnetism was used to reduce oil viscosity, STWA teamed up with Philadelphia-based Temple University around 2007 to research the potential for electromagnetic technology on oil flow rates, providing a research grant to fund research efforts. STWA is the only licensing and sub-licensing agent of AOT; the university holds the patent on the technology.

Dr. Rongjia Tao, chair of Temple's department of physics and a specialist in the area of electromagnetic technology, spearheaded these research efforts. In 2010, Tao and a team of researchers investigated at a nano-scale level the effects produced by STWA's technology. These tests captured data and pictures with and without the field, confirming scientific evidence of its effect at a molecular level. 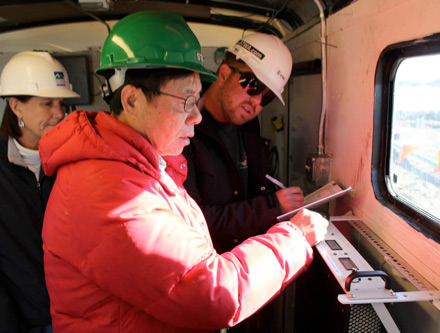 Discussions are underway for use of the patent-pending AOT in the Bakken region of the U.S.

"We believe that major domestic pipeline companies stand to benefit from the implementation of AOT," Kyte noted.

Members of the Pipeline Research Council International, which include major oil companies such as BP, also have expressed interest in AOT.

For plays like the Bakken, one of the fastest growing U.S. oil production regions, the issue is not oil depletion, but difficulty of extraction and lack of transportation to move production to market.

"We believe the commercialization and application of AOT will help producers in the Bakken shale formation area and other domestic regions alleviate some of the difficulty in extraction and transportation of crude oil from new regions." 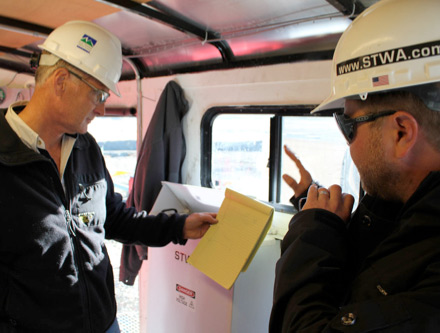 Last month, the company signed a letter of intent with Beijing Heng Xing Ye Technology Development Co. to license AOT for use in the Chinese market. China's growing energy demand has prompted Chinese energy companies to explore for and develop oil and other energy resources, and government-mandated requirements to improve energy efficiency.

Larry Litups  |  January 25, 2012
If this technology is ready to go, why aren't oil companies such as BP using it? It seems like a no brainer. Good article.
Barbara Saunders  |  January 16, 2012
Bravo Karen! Elegantly done and so informative!
Ben Morris  |  January 14, 2012
Great technology, which could easily be solar, water or wind powered.