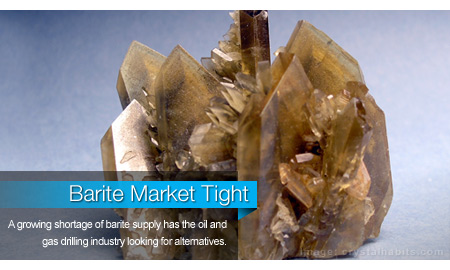 There is a growing shortage of barite supply, which has the oil and gas drilling industry looking for alternatives. Barite, the mineralogical name for barium sulfate, is used primarily in oil and gas drilling, but also is used as non-toxic filler, extender or weighting agent in plastics, paints and rubber, and as a shield around nuclear power plants. It also has medical uses such as blocking x-ray and gamma-ray emissions, and a pharmaceutical grade barite is used for barium milkshakes for intestinal x-rays.

To understand the barite market today, Brian O'Connell, Senior Category Manager of Mined Products, Baroid Supply Chain Group of Halliburton, explained that "the cost of barite over the past 10 years has quadrupled, in the last 5 years it has tripled, and over the past 2 years it has doubled."

In addition to the cost increase, a decrease in quality related to metals and contaminants and a decrease in availability of 4.2 g/cu cm, which has historically been the API specification, are contributing to the current supply issues. 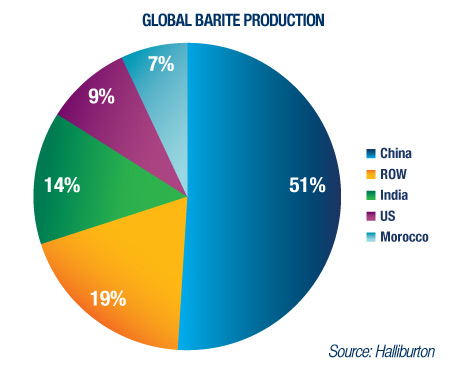 Most barite comes from China, which was responsible for 51 percent of the global supply in 2010. India had a 14 percent share of the barite market followed by the U.S. with 9 percent, Morocco with 7 percent and the rest of the world with 19 percent, according to the Barytes Association. Mined barite in 2010 totaled 7 million tons.

"China is the major barite source and leads the market," O'Connell said. 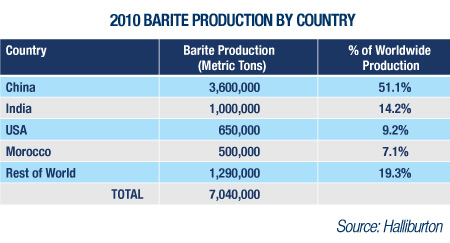 China's mining industry is undergoing a safety overhaul as many accidents and deaths in non-oil and gas related mining industries have prompted the government to enforce stricter regulations comparable to U.S. regulations. With these new regulations comes additional expense that smaller mines can't meet. Thus, the supply burden has fallen on the larger mines.

However, in some cases, the local and regional Chinese authorities have reduced production from the larger mines.

"Up until about 2 1/2 years ago in Xiangzhou County, otherwise known as Elephant County, in Guangxi province, the Chinese were producing 1.2 million tons of barite per year. This year, the volume has fallen to 300,000-350,000 tons, which is a reduction of almost 1 million tons out of China," O'Connell explained. "With global barite production of 7 million tons in 2010, a 1 million ton reduction is a big hit to the market."

To add to the cost, as miners produce more and more barite, they have to dig deeper and further away from export ports. Recent weather-related problems like flooding, droughts and earthquakes not only impacted barite mining, but also transportation to these export ports.

O'Connell also points to the U.S. dollar/Chinese Yuan exchange rate, which has seen a 25 percent change since 2005, as a source of rising barite costs.

According to O'Connell, the high level of worldwide drilling activity correlates to an increase in barite demand. Peak demand and a reduction of barite coming out of China are driving the price and quality issue. "With this kind of imbalance, the scale tips in favor of sellers," O'Connell said.

India's barite market also is impacting the global barite market. India is the second largest producer of barite in the world. However, the country only has one major source of barite and the government owns it. The government entity that manages the mine, APMDC, holds two tenders every three years. The first tender calls for bids to mine the barite, and the lowest qualified bid wins the business. The second tender calls for bids for the barite that comes out of the mine. This goes to the highest qualified bidder.

The latest tender in 3Q 2011 resulted in a dramatic overnight price increase of more than 70 percent on a freight on board (FOB) Chennai basis.

The United States produced about 9 percent of the world production in 2010 of barite and imports much of its demand. As major world-wide buyers, Baroid and other fluid service companies typically ship in large lot sizes -- 60,000 tons in one shipment -- from China to the U.S. Gulf Coast. But Chinese traders are having increasing difficulties accumulating that much material at one time, O'Connell explained, and as a result, lower quality material is making its way into cargoes to fill out vessels, resulting in inconsistent material quality.

Back in 2006, a major barite producer with Nevada mining operations converted to a lower grade of barite, 4.1, to extend their U.S. reserve base and reduce their reliance on imports. According to O'Connell, Baroid immediately followed, and the other two barite producers in Nevada followed soon after. 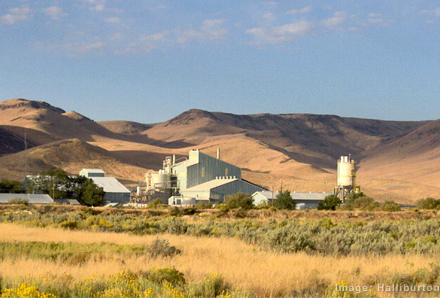 The Baroid mine in Dunphy, NV

The 4.2 and 4.1 barite grades from U.S. sources have basically the same types of impurities. All four of the Nevada producers sold the lower grade product prior to API approval with general customer acceptance. At the same time that this grade was being used in the field, the four major fluid service companies encouraged API to add the lower grade to the approved products list, which has been done.

"We are trying to get operators to stop using material that has a higher density than what they really need. As an industry, we've been pretty successful," O'Connell explained.

O'Connell indicated that the trend toward 4.1 barite is spreading globally and is helping to reduce pressure on miners to dig deeper for of 4.2 barite.

Regardless, the current supply is so tight, fluid service companies are considering alternative materials or even lighter weight barite than 4.1.

"We've looked at hematite and calcium carbonate, but each has characteristics not suitable for weighting of mud like barite, which is why we are looking into lighter barite instead of alternatives," O'Connell said.

MINERO MEXICANO  |  September 22, 2013
Excellent article, I would like to add that the problem is not supply, in my case I am barite producer in Mexico, we ore to meet U.S. demand, the problem is the density rating, which is very limited, gram for acceptance or rejection, we accept minimum density is 4.20 grs/cm3, below this weight is rejected when there mineral density in the range of 3.90 grs/cm3, to 4.19 grs/cm3 in abundance in the mines and that has to be discarded, resulting in a very high mineral waste sometimes a 10 ton 4.20 ton grs/cm3, taking this to increase extraction costs. A solution that would help meet demand and reduce the final price would reduce the density of acceptance. a density of 4.20 m3 barite is equal to 4.20 grams per cubic meter ton lack of kilos in that 4.19 m3 with barite is 10 kilos! 10 kilos more expensive!
carry anthony  |  November 05, 2012
MBMI is the new world leader in barite production. with a 500 million dollar contract MSA Partner to be disclosed 225,000 tons per year. Mabwe Minerals. This 25 cent stock will be $10.00 the 3 M tons in contract is a small percentage of the total inventory
Balu Padmanabhan Ganapathy  |  December 28, 2011
Hi, I have been assoiated for 28 years with Indian Barite Industry.The details of the article is very true. There is sigficant change in Barite mining Industry in India. I still remeber, during early 80s there were 4 companies (Government owned & 3 private companies) use to mine huge quantyties of Barite in Mangampet(V), near Kodur, Andhra Pradesh province (the only place available in India). Since mining depth use to be very less and every deephole blasting, they use to get at least 3000 m/t , these companies use to cater worldwide requirements. In late 90s, there was some political disturbance between the private miners & goverment, all private mining leases were cancelled, thereafter, the entire mining is done by APMDC & its sub-contractors which is slow in mining activity & very expensive due to depth & various companies need to share the profits, so the price has been jacked-up which is not good for the economy. Therfore, the Oil Industry should switch over to conventional Barite or look for alternative to Barite.
Robert L. Gaston  |  December 27, 2011
I wonder if Barite could be recovered from drilling fluids by centrifugal action and filtering to remove non-Barite particles? If so, it would greatly help to relieve the shortage.
Ed Lopez  |  December 21, 2011
I work as Drilling Fluids Engineer in North Dakota. Bad news about the Barite.