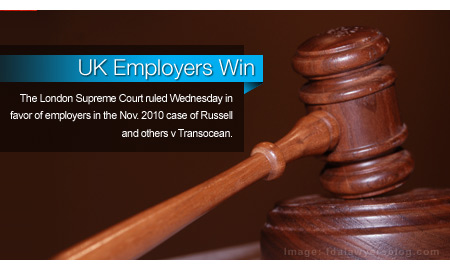 The London Supreme Court ruled Wednesday in favor of employers, saying that time off during offshore workers' onshore "field breaks" exceed the minimum legal amount of time off employers are required to provide workers.

Issued Wednesday at 9:45 a.m., the Supreme Court's decision stated that offshore sector employers can mandate offshore workers to take their annual leave during scheduled field breaks. The ruling upheld Scotland's highest appeals court's decision made in November 2010 in the case of Russell and others vs. Transocean and others.

The court said a "reference to the Court of Justice of the European Union is not necessary in this case, and that the meaning to be given to Article 7 of the Working Time Directive 2003 (WTD), for the purposes of this judgment, is not open to any doubt."

While offshore, the workers worked in 12-hour shifts with 12-hour breaks between shifts. During field breaks (the two-week period onshore), workers typically were not required to do any work with the exception of occassionally attending training courses.

The issue in this case was whether the period spent onshore should count towards the workers' entitlement to four weeks' paid annual leave.

"This has been a long awaited decision and with the Supreme Court also ruling that the matter should not be referred to Europe, it has finally come to a conclusion. As a matter of law, employers in the offshore sector can now insist that annual leave is taken during normal field break/rotational work patterns - a decision that will be welcomed by many in the industry," said Sean Saluja, partner of the Employment Law Division of Paull & Williamsons in a press release. "We have been working on behalf of a number of employers for a long period of time having commenced this journey in 2007 and we are delighted to have this successful outcome."

The Working Time Regulations 1998 (WTR) set out in domestic law the provisions of the Working Time Directive 2003 (WTD), which requires minimum health and safety requirements for the organization of working time, with "minimum rest periods" consisting of daily rest, weekly rest and annual leave.

Article 7 of the WTD and Regulation 13 of the WTR provide that the worker is entitled to paid annual leave of at least four weeks (at the time Russell and others made their claims).

Regulation 15 of the WTR provides that a worker may take leave to which he is entitled on such days as he chooses by giving notice to his employer, but that the employer may require him to take leave on particular days.

While employers are overjoyed, the case-ruling brings the risk of a strike among North Sea workers. Regional organizer of OILC-RMT Jake Molloy told Upstream Online that the possibility of strike action could not be dismissed. OILC-RMT and Unite appealed seven sample cases in an original action before the Abderdeen Employment Tribunal.

What do YOU think?

Neil  |  December 09, 2011
Yep, common sense prevails. I have worked offshore for 24 years and I have never worked for a company that pays for holidays - why should they? Surely 6 months off a year is enough? No one forces anyone to work offshore. If people want to be home every night, then they should get such a job. As usual, some people want something for nothing.
Dave  |  December 08, 2011
This is pretty much the norm for most of the world. The NSEA dudes are basically asking to only work five months of the year. I guess we all would like that. They should remember that they earn in 6 months more than most people earn working 11-12. No point in "killing the goose".
daniel dominick  |  December 08, 2011
The main point being the offshore workers are entitled to 4wks offshore rate holiday pay, and they can still have 3wks off twice a year. The main reputable engineering contractors already give the 4wks holiday leave on top of the normal leave. The fact that companies don't give the leave time speaks volumes of their understanding of the effect on people who cannot have 2wks holiday. We as offshore workers have to allow at least 3dys either side of a holiday for reasons of travel to and from work due to weather. I have even saw people being stuck offshore 8dys over their time due to weather conditions. It also shows that these lords do not take into account we do not go home at night. We can not go for a walk after work to help ease the stress of the job. We can not got down to the pub after work for a pint with the lads. We can not go home get cuddle from the wife and have fun with the kids after work. We have to work the festive season, dont get to sit down to christmas dinner or dont get to bring in the bells with our loved ones. We have to share a room with complete strangers. Most of the rigs still have communal showers. A lot of the rigs serve up food that if you were served in a restraunt you would never return. There is no escape from the stress offshore and from the day before you leave home to go offshore until you step back on that helicopter to go home you are under stress. There is no other civilian career like it.
Stephen Hamilton  |  December 08, 2011
I appreciate it can be difficult to schedule a holiday within the 2 week off period. That said, it should be possible to work with a B2B and have them cover an additional week, this can be reciprocated at a later date, at no additional travel cost to the company.
Scott  |  December 08, 2011
Common sense prevails! A real undertstanding of the good and highly paid jobs/positions and time off that offshore workers have! Well done to the British Justice is all i can say. Some (alot) of North Sea pussycats dont know what side their bread is buttered on. 1 month (4 weeks) minimum paid leave per annum mixed in with the 6 months off they have, is not really a bad place to be now, is it? Try working a month on and two weeks off, and not paid for your time off, as some others offshore workers do around the globe! The North Sea offshore pussycats should learn to be more like the reputation of the pioneering offshore workers of the 70s and 80s - they were North Sea Tigers. Meaoww!
Most Popular Articles
Oil & Gas Job Suggestion
Related Articles
Regional News
North_Sea
700K Industry Pros can’t be wrong.   700K Industry Pros can’t be wrong.
X