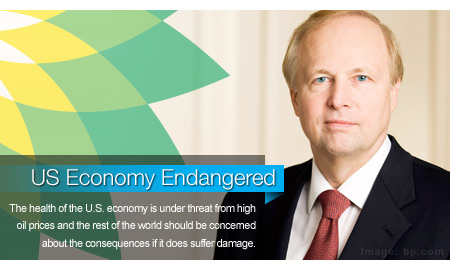 The health of the U.S. economy is under threat from high oil prices and the rest of the world should be concerned about the consequences if it does suffer damage, BP Chief Executive Robert Dudley said Tuesday.

The current oil price, which is around $100 a barrel for U.S. crude benchmark West Texas Intermediate, is "walking a fine line" alongside real economic damage, Dudley said at the World Petroleum Congress in Doha, Qatar.

BP is planning for oil prices to average between $90 a barrel and $100 a barrel next year, Dudley said.

Officials from members of the Organization of Petroleum Exporting Countries Monday said they were satisfied with current oil prices. Supply and demand is balanced and $100 a barrel for WTI is "reasonable", Iranian Oil Minister Rostand Ghasemi said. OPEC is likely to maintain current production levels at its meeting in Vienna next week, officials from several member countries said.

The U.S. is hit hardest by increases in oil prices because it has a smaller tax buffer between the cost of crude oil and the cost of road fuels at the pump, he said.

Dudley said he isn't concerned about the level of oil demand and economic growth in Asia at current prices.

Brian Vaughn  |  December 06, 2011
High oil prices have and will always put the areas of the US that are not oil driven in hardship. This is nothing new and has happened in the past. There has to be a happy medium with regards to the price of oil and what people can afford to pay for energy. If you are in the oil industry as i am we tend to forget that when the oil price is high it hurts consumers in non oil producing areas. If we can keep the price at a level where producers and other oil related businesses can make a profit while keeping energy cost for consumers at a reasonable level we will avoid problems in the future. If not it will force people to use less energy.
RELATED COMPANIES
Company: BP plc more info