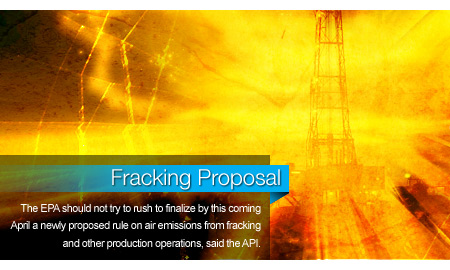 The U.S. Environmental Protection Administration (EPA) should not try to rush to finalize by this coming April a newly proposed rule on air emissions from hydraulic fracturing (fracking) and other production operations, the American Petroleum Institute (API) said during a conference call Tuesday.

Among other objections, API said that EPA did not allow sufficient time for comments on the proposed rule and is not allowing enough time to review those comments and finalize the rule. API recommended that EPA allow one year from April 2012 to publish a final rule.

While API said that it will work with the agency to modify the rule, "let's just say that it is not unprecedented for the industry to litigate an EPA rule," commented Howard Feldman, API's director of regulatory and scientific affairs. "We are concerned about the one-size-fits-all approach" for required control technologies under the proposal, Feldman added.

In a letter to EPA, API listed the following other "critical concerns" with the proposed rule:

Among other recommendations, API said that EPA should "allow sufficient compliance time (varying from 60 days to at least two years) to comply with the equipment-specific NSPS requirements following promulgation of the final rule. API also recommended that the agency should "revise the economic analyses to include all compliance cost and operational variables."

"These revised analyses should be used to limit the emission controls applicability to operations where they are economically justifiable," API said.

Kiona  |  December 09, 2011
I will be putting this dazzling insight to good use in no time.
Chrs Hansen  |  December 05, 2011
Notice that that absent from any addressed concerns is the nonsensical driver for the generally ill informed environmental alarmists. Some are informed and still they feed the fear that we are damaging the structure of the earth with fracing resulting in probable contamination of groundwater. We have to assemble thousands of horses for these fracs and yes there are more emissions then there would if we didn't frac. This tack of putting the focus on emissions and not on ground water is useful to the anti-industrialists. The general public will only learn that the EPA stands against fracing and will be guided to the belife that this is mostly because of the threat to ground water and the excessive use of surface water. Bring the focus of our PR efforts back to water, this is a less cumbersome argument and one which we can win in much less time. We can make the adjustments to using less new water much easier then we can clean up emissions.
Ousaou  |  December 04, 2011
One applicable comment: November 2012 will be a new beginning? If not, good by America?
Tony  |  December 03, 2011
The API should be working more with the EPA and the environmental concerns. API are pushing more to self regulate while looking after their own interests. We are all seeing the repercussions from fracking. Production from cavitation may not be as productive, but certainly safer to the aquifers. Have some respect for the future generations and stop all of this economic based practices to line fat cats pockets. $10.00 a gallon? huh your the obvious joke. And yes I am in the oil and gas drilling industry...
PipelinePete  |  December 02, 2011
I think it is time that the EPA be required to submit to an EIS process before new regulations are enacted. That review should include review and comment from those industries which will be effected. The lead agency for the EIS proces would be a committee drawn from the affected industry who would have complete authority to approve or disapprove the proposed regulations. Its time that the regulated overse regulator.
Randy Pochel  |  December 02, 2011
EPA has for months been working overtime to fill high level slots within the government with people that would make rules that would be difficult for the industry to comply with. This is just another instance where the organization is using fuzzy science to make rules and regulations. Until we can get unelected officials uneducated in the math and sciences from making policy our production costs will keep going up and the difficulty from the government is going to continue to force companies to spend money in other parts of the world.
Bruce Allen  |  December 02, 2011
EPA recently held emissions meeting in the Marcellus Shale Appalachian basin in Pittsburgh Pa. I could not get a single result or any feedback from any E&P company that attended. Evidently this is not going to blow over like Methane emissions have in the past.(production flares).
|  December 01, 2011
"YES" lets see $10.00 a gallon for gas??? because it is quite obvious that the tree huggers and the liberals and the Obama administration don't want to see energy independence and they want to kill the drilling business and kill oil/gas jobs. SOMEBODY PLEASE "HELP" US???? and get these bums out of office and CAN THE EPA WHAT A !!!!!JOKE??