Anadarko: Mozambique Gas Find One of The Most Significant in 10 Years 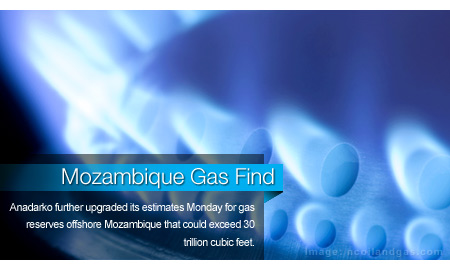 The results of the company's most recent appraisal are further proof of huge gas deposits lying off southeast Africa, an area well positioned to serve the world's top two liquefied natural gas markets--Japan and South Korea--as well as other rapidly emerging gas markets like China and India.

"The positive results of each appraisal well we have drilled and analyzed have continued to increase our estimate of recoverable resources and natural gas in place on our block, and add to our confidence that this could be one of the most important natural gas fields discovered in the last 10 years," Anadarko Chairman and CEO Jim Hackett said.

Anadarko president Al Walker said resources of this size and quality are suited for large-scale LNG development, which is being designed to comprise at least two trains with the flexibility to expand to six.

The news came the same day that Japan confirmed it is in talks with South Korea on possible cooperation to obtain lower prices from LNG suppliers.

"Japan and South Korea together represent more than half of global demand for LNG...it is natural these two countries seek cooperation" to leverage their bargaining power, said Hirohide Hirai, the director of Japan's Ministry of Economy, Trade and Industry's Petroleum and Natural Gas Division.

Two weeks ago, Italian oil and gas company Eni, which has also discovered large amounts of gas off Mozambique, said it plans to invest $50 billion developing it with a view to exporting the 22.5 trillion cubic feet of gas reserves in its 70%-owned Area-4 block to Asian markets. Korea Gas, or Kogas has a 10% share.

Anadarko is the operator of the 2.6-million-acre Offshore Area-1 with a 36.5% working interest. Among the co-owners are Mitsui E&P Mozambique with 20%, Mozambique national oil company Empresa Nacional de Hidrocarbonetos with 15% and Bharat Petroleum with 10%.

On Oct. 6, Anadarko announced it had upgraded the estimated size of the reserves, to at least 10 trillion cubic feet.

Anadarko's final investment decision for its first LNG train offshore Mozambique is expected in 2013 with initial production in 2018, UBS said in a research note recently.