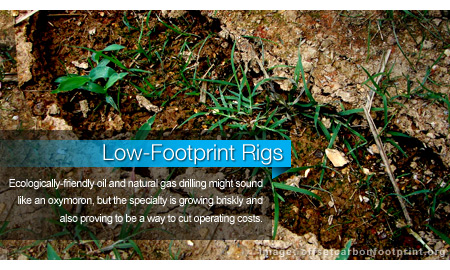 Ecologically-friendly oil and natural gas drilling might sound like an oxymoron, but the specialty is growing briskly and also proving to be a way to cut operating costs.

One of the hot newer developments is the low "footprint" rig, increasingly automated, to take up less land space, transport more easily, use less energy and require smaller crews.

"This has been a wonderful and fulfilling journey for all of us, as we have added to our team some leaders from a variety of disciplines with one mission," said Tom Williams, senior advisor to the Environmentally Friendly Drilling Systems (EFD) program, an effort of the Houston Advanced Research Center (HARC) and Texas A&M University (TAMU). "Our funding comes from industry, the Research Partnership to Secure Energy for America (RPSEA) and other organizations who realize that collectively we can make a difference."

Williams originally became involved with low-footprint rigs when he was vice president of technology for Noble Drilling Technology Services.

"We (Noble and Anadarko) drilled the first dedicated gas hydrate well in the US on the North Slope – one of the most environmentally sensitive areas in the world. We used a platform and many creative methods to reduce our footprint. When we finished, you could not tell we had been there," Williams said.

"Our program has shown that … we can reduce the traffic (these new rigs have half the number of loads) and use fewer people to rig up; they are less of a mess to clean up; they do less damage to the roads, they are quieter, have lower emissions, lower profile (especially the super singles), and less down time," EFD's Williams added.

National Oilwell Varco's (NOV's) Rapid Rig is one example. Deployed today in West Texas, Brazil, Argentina, India, Columbia, Mexico, Venezuela, and California (geothermal), this is a full AC-powered rig and comes with some automation that can make drilling safer and more efficient.

"The physical presence of a drilling rig can interrupt the natural flow of any environment and it is critical to develop rigs that have limited impact and technologies that can help reduce the amount of moves or loads that need to be transported in any given field," said Natalie Wagner, an environmental engineer in the area of environmental innovation for NOV's corporate technology resource team. "If we can reduce the crew, we also reduce the trucks required to transport staff on and off the rig."

"The small footprint was originally meant to reduce site costs, to reduce environmental impact of site construction, and to allow the rigs to work in locations where others simply cannot," said Eric Quinlan, Huisman's product manager for land drilling. "In combination with the containerized construction of the rigs, the rig can also be transported over smaller roads with lower weights, which further allows us to access areas that other rigs cannot reach. The original intent of the rigs was also to allow them to be used on platforms, which further pushed us to shrink the footprint."

"Through the rig development and the product development for the LOC 400, we have always been upgrading the controls of the rigs to make them more and more automated," Quinlan continued. "Our original goals with the automation were both to increase safety on the rig, but also to allow for a more consistent performance. The automation on the rigs allows for consistent top performance simulating what the best drillers can do. The rig automation is a continuing process and right now we are concentrating on full automation of surface equipment."

An American Association of Drilling Engineers paper by Quinlan and Robert van Kuilenburg of Huisman, Williams of EFD-US and Gerhard Thonhauser of EFD-Europe found significant environmental advantages of Huisman rigs. These included:

The paper also showed considerable economic advantages from the "low footprint" rig. For example: "Connecting the rig to the power grid also has a significant cost benefit for a typical well. Cost savings for a typical well can go up to 50 percent or more on fuel cost with the current energy price mix."

An average rig uses 21,000 gallons of fuel for a 10-day program, the authors noted. Assuming 30 wells a year and a 10 percent efficiency gain equates to a savings of $4,700 well or $142,000/year. Theoretically, using different drilling techniques and running from the power grid, a savings of $26,000 should be feasible, the paper said.

"This is more than a day's rig hire in fuel savings per well," the authors said.

Huisman's rigs are operated in the US by Innodrill, a Houston-based company formed this year to promote automated drilling, safety and cost-effectiveness.

|  November 24, 2011
Small rigs what are they any good for, maybe water wells ho ho
Dave Burnett  |  November 18, 2011
Good article - Rigzone is doing its part to get the message out that environmental stewardship is our industry's right to operate.
N.D. Houston  |  November 17, 2011
I was wondering how much ground water has to be dealt with when drilling in the bakken areas,i am working on a drillable walking seal to seal out all fluids & gasses, above the bit, and or hammer. Any help would be appreciated. Thanks, norm
Billy Gamble  |  November 17, 2011
AMC in Houston, TX is also building Green Rigs for the environment and cost savings in mind. Video Link http://www.appmach.com/greenrig.wmv