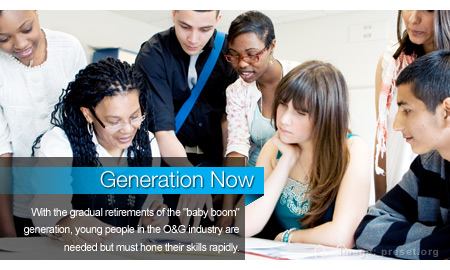 More than ever before, young adults are the lifeblood of the oil and natural gas industry. With the gradual retirements of the so-called "baby boom" generation, young people are needed but need to take initiative to hone their skills rapidly.

"Young people are being called on to take more responsibility at an earlier age. It’s important to get involved with mentoring opportunities," advised Matt Gelotti, vice president of Aon Risk Solutions and president of the Houston Chapter for Young Professionals in Energy.

There's also no shortage of talent, per se, Gelotti said. The petroleum industry can afford to be choosy, so the way in is to be at the top of your class, ideally from a top school in your discipline – especially if you’re in a saturated area, such as law, he noted. Another way in is to major in hot specialties, such as petroleum engineering or geoscience, and to consider both internships and an advanced degree, Gelotti said. 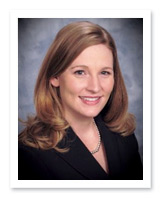 The need to keep hiring young talent remains, as does the need for companies to provide rigorous training and development programs, according to Margery M. Harris, Apache's senior vice president for human resources.

"Apache is a growing company, and we need to continue to bring talented young professionals into the company," Harris commented. "We recruit petroleum engineers, geoscientists and finance and commercial professionals from top universities, and then we offer them opportunities to develop their skills."

"The young people who join Apache bring high expectations; they want to be challenged from Day One," Harris continued. "Through our professional development programs, we provide them with a range of experiences and the opportunity to work on projects that have an immediate impact on our operational and financial results. Our young professionals work alongside seasoned professionals, but they also bring fresh perspectives. We are a better company because of them."

Another example of an active organization is the young professionals (YP) group of the Society of Petroleum Engineers (SPE). The YP group originated in 2001 as a Gulf Coast Section initiative called the Emerging Leaders Program. The group formed for the purpose of developing future SPE leaders, by letting them organize events for the under-36 crowd as a warm-up for taking on section leadership positions. Since then, the YP movement has spread to 66 of the more than 170 SPE sections around the world. The Houston group has more than 2,500 young professionals, which is more than most entire SPE sections. 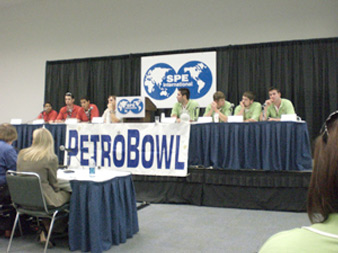 Student members of the Society of Petroleum Engineers compete in PetroBowl at the SPE's annual conference.

SPE International now has a Young Professionals Coordinating Committee to select the YP Committee of the Year award. SPE also has a magazine, The Way Ahead, specifically geared toward and edited by the YP crowd. In addition, there’s an annual PetroBowl college competition at SPE's annual meeting, instigated by the Gulf Coast YPs. In the competition, patterned after the television program 'Jeopardy' with buzzers, teams of petroleum engineering students compete for scholarships by being quick to answer technical questions. The initiative has spawned regional PetroBowls as far away as Brazil and Vietnam, and young Gulf Coast members are mentoring other YP sections as to how it's done.

"These young people have so many activities going on, they rival many entire SPE Sections. They deserve a seat at the table. There's no need to have a board liaison like me as an intermediary. Besides, it's excellent leadership training," said Jeanne Perdue, technical writer for Occidental Petroleum and membership chair of SPE Gulf Coast Section. 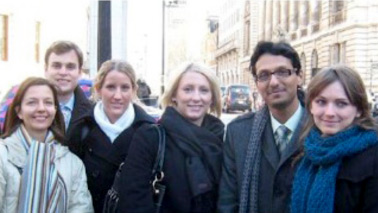 Still another initiative is the World Petroleum Council's (WPC’s) Global Petroleum Youth Committee. The committee involves young people from 17 countries who provide input on WPC’s work in the petroleum industry and society at large.

Bill H.  |  November 19, 2011
In my previous post I meant to say "thankfully I work for a company that does move those of us without a formal education up in the ranks" That makes a big difference in my statement. Barbara, I look forward to seeing the upcoming article on veteran recruitment.
Barbara Saunders  |  November 17, 2011
Bill H, Yes, companies are! I'm doing an upcoming article on it Barbara
Bill H.  |  November 17, 2011
I began my career as a roughneck and thankfully I work for a company that does move those of us with a formal education up in the ranks. I am now a Site Manager and foresee being able to move up even further.The best thing that has happened to us on the lower end of the scale is the recent influx of young veterans coming back from Iraq and Afghanistan. We have been hiring quite a few the last 3-5 years and they are the best guys we've ever had. They have the built in discipline and work ethic we were having a hard time finding before. I think every O&G company should make an effort to recruit these veterans.
Barbara Saunders  |  November 12, 2011
These are very good observations and worth another article. I, too, worry when I hear (often) about people training to be drilling supervisors who've never been on a rig! The problem at all levels of the industry is the lack of hands-on experience. Good idea, Eric, about cross-training people with experience but no degree. Years of safe, reliable rig work should be the equivalent of a degree, its so badly needed.
Eddie  |  November 12, 2011
A very well written article. Yes, the high payed Engineers and Top Heads are required to run a productive and prosperous O&G company. On the other hand, the lower end roughnecks and truck drivers make it all happen in order to get the oil and gas through the sales line and gas meter. What I would like to see is these young Engineers enter the required safety training then place them, (each and every one of them,) on the floor of a working tripple drilling rig. Let them get dirty and bloody their knuckles for a week or two. Teach them the difference between a rat hole and a mouse hole and show them the proper and safe way to throw a set of tongs. Let them eat Spam and crackers at 2:00 AM when its minus 50 degrees, then have them chain up the outgoing water trucks. After a few weeks of this, pay them a little bonus and send them on their way back to the office. If they can hack it, keep em, if not, send em packing to the next company. Thank you. Semper Fi.
Alan  |  November 11, 2011
While reading the article above my thoughts were as per Alan's comments 10th Nov. Many other articles have been written which also focussed on Legal / Planning & Engineering disciplines. The Goverment has to take a large slice of the blame here where the Operating side of the Oilfield is suffering from the lack of professional people who developed their skills during a time served apprentriceship, learning how to be proactive, importance of deadlines, accuracy & disciplined. The industry seems to think Degree Engineers are the solution. We have too many flooding in who do not have the required background. We need personnel trained through exposure to operations who show and progress through thier ability to perform.
Keith Strickland  |  November 10, 2011
All this about the Great Crew Change is true, with not only engineers, but with also the Roughneck side of it. Without us, there really is no need for the engineers now is there? I've been in the old field for 19 years (on the roughneck side of it) and I'm 37 years old. I've seen good people quit and retire. The oil field keeps building rigs without the right personnel to put on them, which cause performance to go down. It doesn't take a college degree to run a rig, just a strong back and the will to work. Not everybody can have an office job because without the workers the office closes down.
mohan  |  November 10, 2011
Would like to know the content of YPs in the disaterous consequences of BP incident in GOM, USA
Eric  |  November 10, 2011
Great point Alan! Although, overall this is a good article by Barbara, as a young 30 something Drilling & Completions HSEQ Supervisor for a major operator with a service background, I agree, the focus for the operational side such as most of us work in, needs attention, rather than just always focusing on these engineering / college graduate positions. This is where all the field work gets done. There should be more of a willingness by O&G operators to cross train some of these young people who have good experience, are intelligent, and know rig operations thoroughly, but might not necessarily have an engineering or science degree.
Alan  |  November 10, 2011
This article looks at the top end of the engine and has given little or no attention to the bottom end where all the hard work goes on. Who is focusing on the rig workers, transport personnel and all the service companies where people have to go out in minus 30-60 degrees and heat that would burn ones skin on a hot day. This is also an area where the boomers are departing. It is a lot harder to find such specialized people and all the engineers in the world cannot move a rig nor drill for oil without these other people!