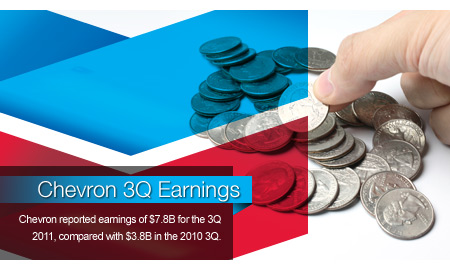 Sales and other operating revenues in the third quarter 2011 were $61 billion, up from $48 billion in the year-ago period, mainly due to higher prices for crude oil and refined products.

"We had another successful quarter," said Chairman and CEO John Watson, "with both strong earnings and cash flow. Current quarter earnings for our upstream operations benefited from higher crude oil prices on world markets. At the same time, gains on asset sales and improved margins for refined petroleum products contributed to increased earnings for our downstream businesses."

Watson commented, "We continue to progress our major capital projects. The recent decision to develop the Wheatstone LNG project represents a major milestone in the company's efforts to commercialize our significant natural gas resource base in Australia. The Wheatstone and Gorgon LNG projects are expected to provide substantial new energy supplies to meet growing demand in the Asia-Pacific region." Additional upstream achievements in recent months include:

"In the downstream business, we reached a major milestone in our efforts to streamline our asset portfolio with completion of the sale of our refining and marketing assets in the United Kingdom and Ireland, including the Pembroke Refinery," Watson added. The company also completed the sale of certain other fuels-marketing and aviation businesses in the Caribbean and South America in the third quarter 2011.

Earlier this week, the company announced an increase in the quarterly dividend of 3.8 percent to $0.81 per share. This follows an increase of 8.3 percent announced in the second quarter 2011. The company purchased $1.25 billion of its common stock in the third quarter 2011 under its share repurchase program.

U.S. upstream earnings of $1.51 billion in the third quarter 2011 were up $562 million from a year earlier. The benefit of higher crude oil realizations was partly offset by lower production.

The average sales price for crude oil and natural gas liquids in the 2011 third quarter was $103 per barrel, up from $70 a year earlier. The average price of natural gas was $5.50 per thousand cubic feet, compared with $4.73 in last year's third quarter.

Net oil-equivalent production of 1.94 million barrels per day in the third quarter 2011 was down 109,000 barrels per day from a year ago. Production increases from project ramp-ups in Canada and Brazil were more than offset by maintenance-related downtime, an approximate 39,000 barrels per day negative effect of higher prices on volumes produced under cost-recovery and variable-royalty contract provisions, and normal field declines. The maintenance-related downtime included the effects of damage to a third-party pipeline in Thailand, since remediated, which resulted in the shut-in of production. The net liquids component of oil-equivalent production decreased 5 percent to 1.35 million barrels per day, while net natural gas production declined 7 percent to 3.50 billion cubic feet per day.

Capital and exploratory expenditures in the first nine months of 2011 were $20.8 billion, compared with $15.5 billion in the corresponding 2010 period. This represents 80 percent of the company's planned annual capital and exploratory expenditures announced in December 2010. The amounts included $1.0 billion in 2011 and $900 million in 2010 for the company's share of expenditures by affiliates, which did not require cash outlays by the company. Expenditures for upstream represented 90 percent of the companywide total in 2011. These amounts exclude the acquisition of Atlas Energy, Inc., which was accounted for as a business combination.