Natural gas from shale formations represented a walloping $37 billion of the overall $108 billion that the petroleum industry invested in technologies to reduce greenhouse gas (GHG) emissions between 2000 and 2010, according to a new report released by the American Petroleum Institute (API) on October 20.

This $108 billion also comprised nearly half of the total estimated $225 invested by all private industry combined and the federal government in GHG-reducing technologies, noted Kyle Isakower, VP of Regulatory and Economic Policy for API. The new report showed a major uptick in such investments from the 2008 study due to the inclusion of shale gas and an increase in federal government spending on GHG emission reduction, Isakower added. 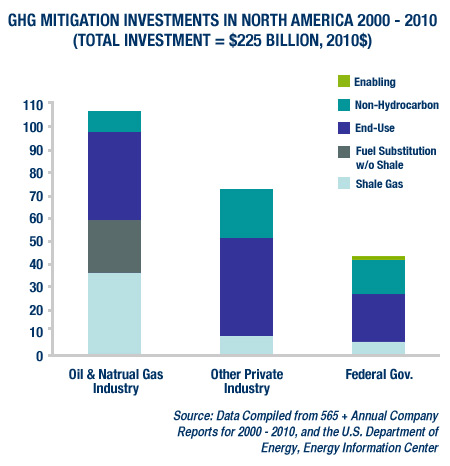 "Major investments by the oil and natural gas industry included shale gas (especially over the 2009-2010 period), efficiency improvements including combined heat and power, and advanced technology for vehicles. Investments in wind, biofuels and solar were also made," said the study, which was conducted for API by T2 Associates. 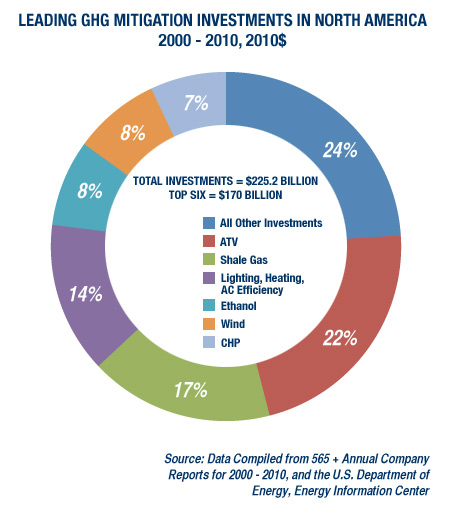 Six emission reduction technologies led the way in public and private investment. As measured by expenditure share, these were:

Picture 11 million cars off the roads. That's the impact that the above efforts represented just last year, in reducing some 56 million metric tons of greenhouse gas emissions, said API's Isakower.

Specifically, the report noted that fuel substitution accounted for 38 to 46 percent of the emissions reductions between 2008 and 2010. This included projects such as installing better plunger lift seals and improved well completion technology. Another 35 to 45 percent of the reductions came from combined heat and power, also known as cogeneration, projects over the same period. Remaining reductions occurred in the non-hydrocarbon areas, including solar and wind energy for electricity generation, as well as biofuels production.

David  |  October 24, 2011
You have to play to publicity game if the industry is meant to thrive. The science is necessary for operations, the fads are necessary to make people happy. We can no longer be reactive and defensive to public opinions, its time we began to show the public the benefits and good intentions of the petroleum industry.
hosein-davodi  |  October 22, 2011
With notice of this problem that in short near future,the world population would be very high(enormous)and environmental pollution would be serious and human-life threatening,therefore remarkable reduction of GHG is vital and end-solving practical procedure. As a result,any expenditure and spending money for these institute research centers,are inevitable. On my privateshare, have translated the very useful and practical book of "Environmental control of petroleum engineering" from API.Kind regards
Darryl Gunn  |  October 21, 2011
API did have a name for technical competence. API should stop trying to promote our industry on the nonsense of CO2 being a significant greenhouse gas. The oil & gas industry requires an understanding of Geological processes and history. Using the latest unscientific fad to promote our industry is to discount the collective knowledge of the professionals working in the oil & gas industry.