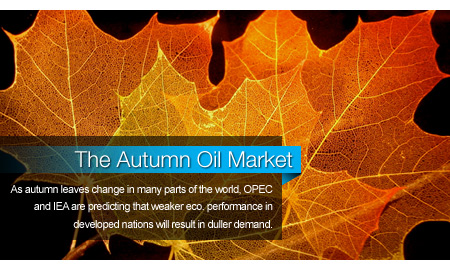 As autumn leaves change in many parts of the world, both OPEC and the International Energy Agency (IEA) are predicting that weaker economic performance in developed nations will result in duller demand than previously forecasted. Even in the more robust economies of China and India, OPEC sees factors that could dim demand over previous projections.

OPEC's monthly oil market report, released on October 14, projected that world economic growth will remain unchanged at 3.6 percent in 2011 and revised 2012's forecast down to 3.7 percent.

"At least for now, the deceleration of global output seems to have stabilized, although many risks remain, particularly in the Euro-zone," the report said. It predicts that:

"However, the magnitude of the recovery remains uncertain," the report cautioned.

By contrast, growth levels in developing countries will remain relatively high, OPEC reported. OPEC sees China remaining unchanged at 9 percent for 2011 and 8.5 percent for 2012, but India's forecast was revised lower to 7.6 percent for both 2011 and 2012.

"Uncertainty in the world economy has dimmed the picture for 2011, particularly in the OECD region," the OPEC report stated, adding that "Chinese oil demand is bound to uncertainty because of new government policies aimed at reducing transport fuel use. India's increase in retail prices is expected to play a major role in dampening oil consumption in the coming year."

"Due to the weakening economic outlook," the report continued, "[T]he forecast for world oil demand growth in 2012 has been revised down to stand at 1.2 million bpd."