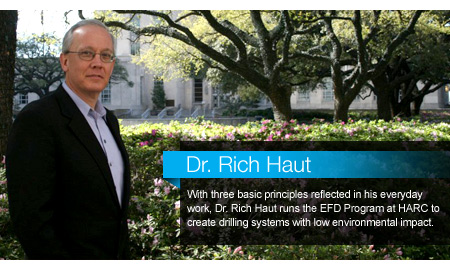 That work involves finding grants and participating in research so companies can develop cleaner and "greener" ways to drill for oil and natural gas.

Haut recalled, "My mother always told me three things, every day. First, leave your world better than you found it. Second, just take what you need. Third, if you harm someone or something, let's make it right."

Haut said that these three principles are reflected in his everyday work.

Working with more than 100 participants in academia, industry, environmental groups, government agencies and government laboratories, some of them providing financial support, the EFD program identifies new technologies and transfers them to areas that need to incorporate new practices to address environmental concerns.

Haut came to HARC via Halliburton Energy Services Group, where he was Deepwater Integrated Technologies Manager. Prior to that, Haut held various management and staff positions in drilling operations with predecessor companies of today's ExxonMobil.

"Tom Williams, Dave Burnett and I formed the Environmentally Friendly Drilling Systems (EFD) team six years ago (2005). Dave, at Texas A&M University, took the lead to obtain the initial funding from the U.S. Department of Energy. Tom took the lead to recruit industry partners and I took the lead to engage various environmental organizations," Haut explained, concerning the origins of the EFD Systems program.

In 2008, Haut took the lead to obtain the next round of funding from the Research Partnership to Secure Energy for America (RPSEA). This funding was awarded in 2009.

"In February 2009, we formed the University/National Laboratory, and in October 2010 we kicked off our European Chapter," Haut said. "In November 2010, we applied for our next round of funding from RPSEA and are currently in contract negotiations for this effort – The EFD Technology Integration Program (EFD-TIP) that will focus on field testing of technologies."

Haut said the group expects to initiate the EFD-TIP in January 2012 along with the Coastal Impacts Technology Program (CITP) that focuses on work force development, water issues and technologies to reduce the environmental tradeoffs associated with oil and gas activities along the Texas Gulf Coast.

"Innovation knows no geographic boundaries," says a fact sheet on the EFD Systems program. Thus, the program includes a European chapter that identifies and applies best practices in Europe, as well as identifies new applications and innovations. Additional chapters around the world are being contemplated.

Next: Success Stories of the EFD Systems Program

Leon Robinson  |  October 07, 2011
Finally some publicity for an environmental program run by some practical engineers instead of non-technical radicals. Believe it or not, oil companies are comprised of people (individuals) who are interested in protecting the environment. Oil companies have every incentive to keep from having blowouts or spilling oil. Employees are interested in keeping the environment clean and unharmed - they live there also.
moreo  |  October 07, 2011
All I gathered from the article, they tapped into government money with the hopes of gaining more money. There isn't any real substance in their work, only fund raising.
Marian Higgins  |  October 07, 2011
Good intro to Dr. Haut's work - look forward to reading more RigZone articles on the EFD program
Barbara Saunders  |  October 05, 2011
Thanks for the positive feedback!
Jeanne Perdue  |  October 04, 2011
Nice photo! Good lead, good story. What is Tom Williams up to these days?
Gary Edwards  |  October 04, 2011
Well Done Get into Geothermal Tap the Magma Wake up these drilling Companies to Tap the resources Lower Magma when the oil gets dried up Good they invested in Someone forget Solar Wind Turbines To Much maintenance not enough technicians and killing Birds Stay offshore and Green SPGasia.net good Luck But Hurry Up !! we waited too Long !!!!
Alan Fortune  |  October 04, 2011
Go for it. It will not be easy but, NOTHING is impossible, the impossible just takes a little longer.
Travis Mathews  |  October 03, 2011
Is that the quad at LSU in the background? GEAUX TIGERS!
Most Popular Articles
Oil & Gas Job Suggestion
Related Articles
700K Industry Pros can’t be wrong.   700K Industry Pros can’t be wrong.
X