Editor's Note: The Great Crew Change refers to the rapid shift in oil industry demographics triggered by mass retirements of Baby Boomers, resulting in a shortage of experienced technical talent. This series addresses some novel actions that are being taken by individuals, companies and non-profits to ease this transition.

The live possum did not attend the drilling basics class on this particular day.

Yes, that reads "live possum," or opossum. For non-US readers, an opossum is a small, Western Hemisphere marsupial known for its habit of pretending that it is already dead to avoid being killed. 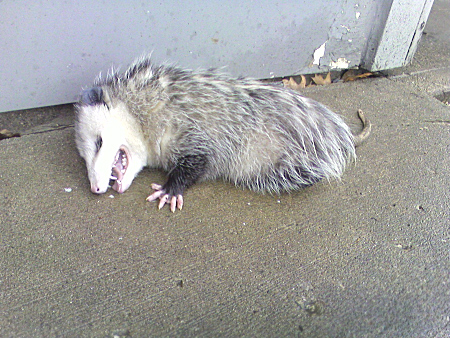 A live possum, shown here "playing possum" (or pretending to be dead to avoid getting killed) is sometimes used to illustrate the term "possum belly" (the back tank on a shale shaker) in a unique class on oil and natural gas drilling basics taught by retired physicist Dr. Leon Robinson. Source: Wikipedia

Live possums trapped (humanely) his own backyard – when the possums cooperate, that is – are part of the unique teaching tools that retired ExxonMobil physicist Dr. Leon Robinson, a.k.a. "Doc Leon," employs to illustrate the points he is making to students in his week-long course, "Basics in Drilling," at the PetroSkills facility in Katy, Texas. To be fair, Robinson mostly sticks to the material in the voluminous course book, but he peppers in learning experiences with definite impact.

A live possum, for instance, is used to illustrate the drilling term "possum belly" (the back tank on a shale shaker,) partially for the benefit of students who might be unfamiliar with the animal.

"I like to make the course memorable," said Robinson, 84, adding that the practice of trapping live possums sometimes offends the most "politically correct" students. "One walked out and refused to take the rest of the class," he observed, adding that he actually takes the animals from a more congested suburban area to the more open lands around Katy, where he releases them into a better habitat.

Whether or not possums oblige that particular day, Robinson tosses in (at his own expense) a luxurious rented "party bus" to transport students to and from the Ocean Star, a jackup rig turned into an offshore drilling museum in Galveston, Texas, for an intense four-hour lecture and tour.

Then, there's the "Drilled Solids are EVIL" lecture, featuring devil, skeleton and other eye-grabbing graphics to drill home the point that drilled solids break drill bits, causing them to be lost in the hole, raise costs sky-high, and cause "sleepless nights." To underscore how Robinson's quirky style does not dilute substance, the lecture's core was extracted from an actual technical paper that he delivered to the American Association of Drilling Engineers (AADE) in 2006.

Robinson led a particularly distinguished career as a research physicist at ExxonMobil and its predecessor companies, Exxon, Esso, and Humble Oil, where he started in 1953, retiring in 1992. Among his many accomplishments, Robinson earned 34 patents in oilfield physics and was presented with an award in 2008 from the Society for Petroleum Engineers (SPE) as one of a handful of ground-breaking pioneers in 20th century drilling.

Doc Leon enjoys sharing his years of experience and teaching the basics of drilling to young professionals just starting out in the oil industry. "It's a way I feel I can give back some of the satisfaction and fulfillment I've gotten from this profession," he commented.

Robinson is adamant about using plain English and developing interest in the petroleum industry in everyone he can.

"I really want to make this material meaningful to both technical and non-technical audiences," Robinson stated. "I have every kind of student in there, from administrative assistants with high school diplomas to people with advanced technical degrees, from beginners to more experienced people. I want to charge everybody up with enthusiasm for the industry, but also imbue them with the importance of responsible practices." 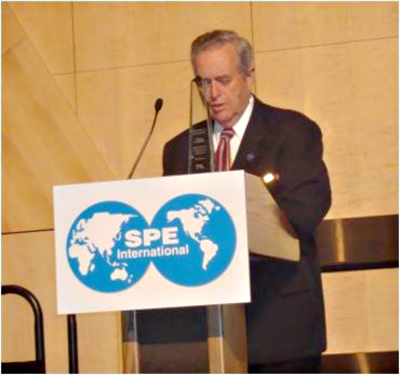 Dr. Leon Robinson accepting "Pioneers in Drilling" award from the Society of Petroleum Engineers (SPE) in 2008.

This session of his class covered pressure issues in depth (pun intended), with a good number of key equations included. Yet one non-engineer in the class, Jessica Shelton, 21, said: "I understand everything he's saying." Shelton, a former paralegal, has been in the industry for one year as a training manager.

In fact, career-changers were evenly matched with recent college graduates in the class – a microcosm of what's happening in the industry today. One "seasoned" member of the class, Duwayne Sanders, 45, is an electrical engineer who's been a recruiting manager for ExxonMobil and now wants to become an environmental specialist. "I want to change my career path," Sanders said.

Just embarking on his oil and gas industry career path was Sean McDermott, 23, a recent supply chain specialist graduate who decided to be a rig supervisor, instead. "It's very educational," McDermott said of the course.

Also fresh out of college was Andrew Wolke, 23, a construction engineering technician hired six months ago as a rig supervisor trainee by ExxonMobil. Asked if he was concerned about becoming a victim of layoffs in the next industry downturn Wolke replied confidently: "Absolutely not. I'm not worried at all." When asked why, Wolke explained: "I'm not even sure they need me now – except to be trained while experienced trainers are still available. They need people my age so badly, it's not even funny."

Jack Nelson  |  July 08, 2011
The next time they have a trip to the Ocean Star stop in Clear Lake and pick me up. I spent some time on the Ocean King during my 46 years in the industry and perhaps could help explain things to people. Like the Dept. of Zoological Affairs investigating the Monkey Board after the Ocean Ranger sank off Canada.
Kamin Lambertson  |  July 08, 2011
This makes me want to start a second career (currently in my 42nd yr sailing as a mariner and working as an unlimited master) Hats off to the professor! Thanks for running a great school.
waiting on mgmt  |  July 07, 2011
As a 9 year guy who started with a major service company and earned his stripes the hard way, I have but one thing to say to the "old guard". There are a few of us who would like to run the show but it seems some folks don't know when to get out of the way. There's going to be a mass exodus of us too because this is extremely frustrating for a mid 30s employee who has paid his/her dues and still cant get a promotion and some ownership in the operations. I'm not being cynical just stating the general attitude you can come to know at any happy hour in the Houston Energy Corridor. The oil and gas companies better get smart soon or were gone too.
Juan A. Garcia  |  July 06, 2011
Doc is one of a kind but the kind that we need more of. I have had the pleasure of knowing and working with Doc since I first came to work for Humble back in 1966. He and I spent a lot of time together in the field working on several projects such as solids control and telemetry. He has been a great mentor to me and many drillers. Once you meet Doc you never forget him. He has a unique way of capturing and keeping the attention of his students every time he teaches on any drilling related subject. His personality, energy, knowledge, and and creativity in the industry is unmatched in the classroom.
D. Lynch  |  July 05, 2011
This has been discussed since I joined the industry in 1997. The industry has had plenty of time to prepare for the "crew change" but has done a poor job of making it a smooth transition. Commodity price drops often halt recruitment and retention plans even though they are short lived. Recruitment has greatly improved since 2005 but it seems to be too late and too little. If it werent for the recession in late 2008, the "boomers" would already be in the middle of a mass exodus from the industry.
salman  |  July 05, 2011
POSSUM BELLY good job:)
Bill Cottrell  |  July 05, 2011
The need for "senior personnel" with "vast experience" is not a joke! It is or should be a vary grave concern for industry. We need to teach these young people "on the job". GOOD REPETITION is the best teacher of all. We need to use emails with the young people, if we are not on location with them, so they don't make inexperienced mistakes! We were taught and now it is our turn to teach them. I personally think, that a 23 year old young engineer is a bit risky even if he does catch on quick. There is just too much to learn! We need to use "Practical Drilling Schools" and Onsite Training to get them up too speed. It is a great industry! We need you and welcome you to our industry! Good luck to all of you young people!
Mike Bonge  |  July 04, 2011
Great Article Great Man. Helped me so much during my career