The KC919-3 wildcat well confirmed the presence of a second oil accumulation in Keathley Canyon block 919 with semisub Maersk Developer. The well encountered more than 475 feet of net oil pay and a minor amount of gas in predominantly Pliocene high-quality sandstone reservoirs. The well, which is continuing to drill deeper, is located 250 miles southwest of New Orleans in approximately 7,000 feet of water. 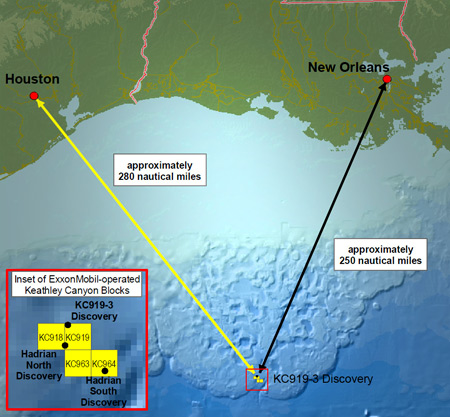 Drilling in early 2010, it encountered oil and natural gas at Hadrian North in KC919 and extending into KC918, with over 550 feet of net oil pay and a minor amount of gas in high-quality Pliocene and Upper Miocene sandstone reservoirs.

"We estimate a recoverable resource of more than 700 million barrels of oil equivalent combined in our Keathley Canyon blocks," said Steve Greenlee, president of ExxonMobil Exploration Company. "This is one of the largest discoveries in the Gulf of Mexico in the last decade. More than 85 percent of the resource is oil with additional upside potential."

"We plan to work with our joint venture partners and other lessees in the area to determine the best way to safely develop these resources as rapidly as possible," Greenlee said.

Over the past decade, ExxonMobil has drilled 36 deepwater wells in the Gulf of Mexico in water ranging from 4,000 feet to 8,700 feet.

"As one of the largest lease holders in the Gulf of Mexico with interests in over 370 leases, we are committed to the continued safe exploration and development of this important national resource," Greenlee said.