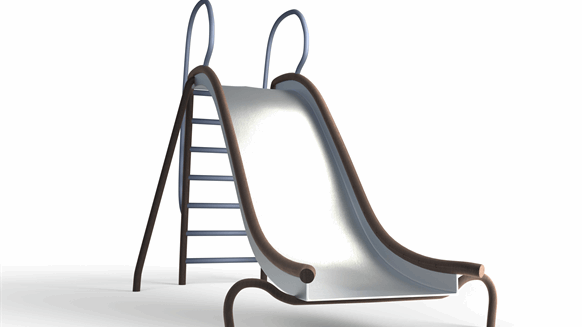 Oil started 2019 with another price slide as weaker Chinese manufacturing data pointed to slowing demand and to growing risks of a global crude surplus.

(Bloomberg) -- Oil started 2019 with another price slide as weaker Chinese manufacturing data pointed to slowing demand in the world’s second-biggest consumer of the fuel and to growing risks of a global crude surplus.

Futures declined 1.6 percent in New York after a turbulent 2018 that saw volatility soar in its final weeks as concerns over the U.S.-China trade dispute and an uncertain economic outlook roiled stock markets. Though both New York and London crude benchmarks rallied in the last days of 2018, they each lost 20 percent or more during the year on expectations that booming U.S. shale output could unleash a new glut.

“The omens are far from encouraging,” said Stephen Brennock, an analyst at PVM Oil Associates Ltd. in London. “Global oil inventories will build in the coming months. This is hardly a recipe for a sustained price recovery.”

West Texas Intermediate for February slipped 72 cents to $44.69 a barrel on the New York Mercantile Exchange at 8:52 a.m. local time. The contract rose as high as $46 earlier in the session. Prices slid 25 percent to $45.41 in 2018. Total volume traded Wednesday was about 13 percent above the 100-day average.

Brent for March settlement fell 70 cents to $53.10 a barrel on the London-based ICE Futures Europe exchange, and traded at an $8.13 premium to WTI for the same month. The global benchmark crude declined 20 percent to $53.80 in 2018.

Although the Organization of Petroleum Exporting Countries and its allies have pledged substantial output curbs to prevent an oil surplus from forming this year, investors remain concerned that the cutbacks won’t be deep enough to make way for yet another supply surge from Texas and other states driving the U.S. shale revolution.

Warning lights in the global economy are only compounding expectations that there will be more oil supply than needed this year.

While President Donald Trump made positive noises about reaching a trade deal with his Chinese counterpart Xi Jinping over the weekend, the Chinese data -- and similar readings from across Asia -- are a stark example that the protectionist showdown is starting to have an impact on economic activity.

Trump tweeted Tuesday that gasoline prices are low and are expected to fall this year, likening the drop to a tax cut. He also signaled he wants to “ make a deal” to break a stalemate that’s had part of the U.S. government shut for 11 days.

Other oil-market news: In OPEC member Libya, two oil ports were closed due to bad weather. Waha Oil Co.’s production has  slowed after the Es Sider and Brega terminals were shut, and a total stoppage may be required if the situation doesn’t improve, National Oil Corp. said in a statement. Russia’s oil production reached a post-Soviet high last year even as it coordinated supply with OPEC. OPEC oil output declined by 825,000 barrels a day in December and is set to drop 870,000 barrels a day in January, consultant JBC Energy wrote in a report. U.S. light oil has become too cheap for Gulf Coast refiners to pass up. The fuel producers processed oil with an average API gravity of 33.06 in October, according to the Energy Information Administration. The measure of oil density matches a record set in February. Iran will invest about 15 billion rupees ($214 million) to expand a refinery run by Chennai Petroleum Corp. in south India, the company’s managing director said, amid U.S. sanctions on the Persian Gulf nation that have severely hit its oil exports.