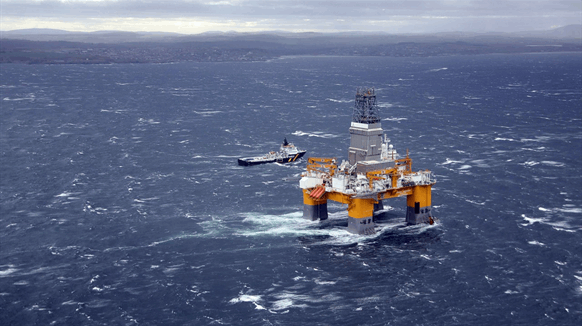 Equinor has contracted an Odfjell Drilling semisub for the Breidablikk project in the North Sea. PHOTO SOURCE: Equinor

Equinor (NYSE: EQNR) has awarded Odfjell Drilling (FRA: OD3) a letter of intent (LOI) for drilling and completing the Breidablikk project with the Deepsea Aberdeen semisubmersible rig, Odfjell reported Monday, adding that the LOI is subject to contract finalization.

“We are delighted to secure another long-term development project with Equinor and build upon our successful relationship by adding the Deepsea Aberdeen to the Equinor fleet,” Odfjell CEL Simen Lieungh commented in a written statement emailed to Rigzone.

The scope of the contract – slated to commence in the spring of 2022 – entails 15 firm wells over an estimated 2.5-year duration and covers nine optional wells, Odfjell stated. The company noted the firm scope’s contract value is approximately US$290 million and excludes any integrated services, modifications/upgrades and mobilization/demobilization fees. Wells delivered ahead of target qualify for a performance incentive rate, and a mutually agreed-upon rate based on market and performance criteria will apply to optional wells, Odfjell added.

Operator Equinor revealed on Sept. 28, 2020, that it – along with partners Petoro AS, Vår Energi AS and ConocoPhillips Skandinavia AS (NYSE: COP) – had decided the develop Breidablikk. The companies estimate the NOK 18.6 billion (US$1.95 billion) development will produce approximately 200 million barrels of oil, and an Equinor official has pointed out Breidablikk ranks among the largest undeveloped oil discoveries on the Norwegian Continental Shelf.

“In this contract we have further developed the performance-based compensation system, enabling the supplier to increase their profit per well delivery by completing safe and efficient operations,” Peggy Krantz-Underland, Equinor’s chief procurement officer, remarked in a separate written statement. “We regard this as an important step towards reaching our ambition of shifting focus from rate per day to cost per well, a move we believe is important to ensure sustainable costs in the future.”

Equinor stated the contract, along with other contracts awarded for Breidablikk, is subject to regulatory authorities’ approval of the plan for development and operation.