NSTA CEO Interrupted By Protesters At Conference In London 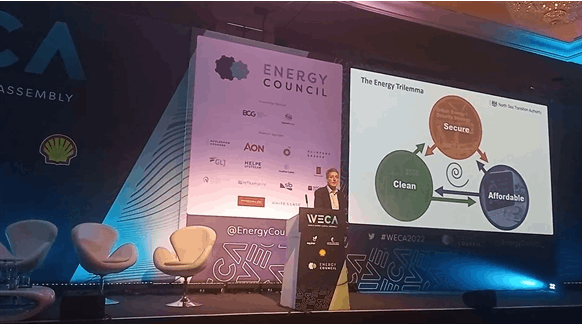 The CEO of the NSTA has been shouted off stage by environmental activists during a speech at the World Energy Capital Assembly in London.

Andy Samuel, the CEO of the North Sea Transition Authority, has been shouted off stage by environmental activists during a speech about the energy trilemma at the World Energy Capital Assembly (WeCa) in London.

The activists rose and started shouting during Andy Samuel’s segment on the energy trilemma at WeCa, a major event for the oil and gas industry. In the speech, he outlined the need for an affordable, secure, and clean supply of fuel and power for the world.

The environmentalists spoke against the NSTA offering new oil and gas fields through its latest licensing round. Another point of contention was the proposed development of the Rosebank oilfield in the West of Shetland.

On the video, Samuel can be heard calling a pair to speak to him during a break. He also asked them to listen to the presentation. The protestors were escorted by event security and the organizers used loud music to silence the shouting by the activists.

BREAKING: We just disrupted Andy Samuel the man in charge of the UK's oil & gas regulator - as he spoke in a fancy London hotel to WeCa an event choca-block with climate killers from Shell to Equinor.

Almost £3k a ticket but we snuck in

Fossil Free London opposes new fields and it reminds us that the International Energy Agency (IEA) issued a report last year saying new exploration needed to stop under its net zero pathway for 2050. As for the NSTA, its job is to ensure oil and gas firms meet climate targets set by the UK Government and has justified new licensing through its climate checkpoint system.

The NSTA also believes that shutting down production in the UK would only leave the country in demand of greater imports of fuel due to the supply issues which arose during the invasion of Ukraine.

“They’re talking about how to make more money from more drilling. They’re ignoring climate science which is really clear – we need to stop oil and gas. We had temperatures of 40 degrees this summer, it can’t go on like this. The industry needs to listen, and the government needs to listen,” the protestor in focus stated.

“The reason for this disruption is very simple. We want to live. The North Sea Transition Authority is ‘transition’ in name only unless it progresses beyond fossil fuels; that means stopping new oil and gas, to stop the devastation,” Robin Wells, director of Fossil Free London, said.

It is worth reminding that this was the second time in two weeks that the NSTA has been targeted by protestors after Extinction Rebellion protested against the organization in Aberdeen.