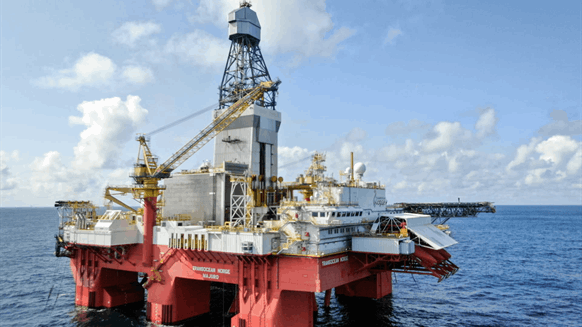 Utilization and deal awards to North Sea semi-submersibles during 2022 improved, but the 2023 demand outlook could result in more units leaving the region next year.

Utilization of North Sea semi-submersibles as well as award activity during 2022 has shown improvement, but the 2023 demand outlook is uninspiring and could result in more units leaving the region next year, Westwood claimed.

Westwood said that North Sea semi supply has shrunk by 36% or by 17 units between January 2015 and November 2022, following a prolonged lack of demand for these units, especially in the more mature UK sector. The semi market remains seasonal, with higher utilization witnessed in the spring and summer months and lower utilization in the months of harsher weather.

In July of 2022 however, this rig segment hit committed utilization of 90%, which is the highest figure recorded since June 2015 within the region. As we are now in autumn, demand has subsequently declined and utilization is now sitting at just 78%, with nine units currently idle, two of which are cold stacked.

While many other regions in the world are now recording consistently committed rig utilization highs in the 90% arena, Northwest Europe in comparison is lagging. This has led to more units leaving or being bid outside the region for new contracts with longer terms and higher dayrate potential, and the same can be said for the North Sea jack-up segment too.

So far this year, Island Innovator and Deepsea Bollsta have left for new campaigns in Africa, and rumors suggest a third unit is planned to leave for Africa next year, while another may pick up a campaign in Australia, starting in the second half of 2023.

This further shrinking supply will help to buoy utilization in the near term but could pose availability issues further down the line if demand picks up, which Westwood predicts may be the case from early 2024.

During the third quarter of 2022, the North Sea semi market fixed 3,899 days of contract backlog, which is the highest number of days fixed during a single quarter since 2012. The average contract duration is also on the rise and is currently sitting at 264 days in the year to date, which is also the longest it has been since 2012.

Recent fixtures have also shown upward movement in dayrates too. Transocean Norge could earn an average dayrate of $408,000 under a new deal with Wintershall Dea and OMV in Norway assuming all project approvals are given, while market sources suggest a recent fixture for Transocean Barents in the UK sector will be above $300,000 per day.

However, 37% of the backlog awarded so far this year will not begin until at least 2024 and the current visible outstanding demand for North Sea semis in 2023 doesn’t look quite so promising.

Westwood said that data records just under 2,000 days of demand outstanding for work likely to be awarded in 2023, consisting of pre-tenders, tenders, and direct negotiations. Additionally, there is prospective demand for approximately 2,300 further days of work yet to be tendered.

This outstanding demand equates to a total of just over 4,260 days of potential work, which is almost 64% less than the visible demand outlook for 2024. Additionally, the average contract duration of this outstanding demand is just 171 days, around 43% lower than this year’s current figure.

During 2024, Westwood expects to see several new Norwegian developments move ahead because of the tax incentives that were implemented by the government in 2020. Meanwhile, there are a variety of longer-term UK campaigns likely to start up, consisting of plugging and abandonment (P&A) work as well as development projects.

There are four semis in the region that currently have free and clear availability, but as previously mentioned, two of these are expected to mobilize for work in new regions and the other two are rumored to be in the running for new deals in the UK. Four further units could also become available during 2023 if extensions or new work are not secured, and a handful of other units that could also move into the North Sea from China, Canada, and other regions should demand a call for it.

“The market fundamentals within this segment are showing potential for a tighter market, but likely not until 2024 unless further demand for 2023 emerges. This will of course depend on other factors, such as the response to the additional hike in windfall tax on UK oil and gas profits, as well as the Norwegian government’s plans to phase out its tax relief package that was introduced as part of its response to the Covid-19 crisis in 2020,” Westwood said.

Until the market constricts, Westwood believes drilling contractors will continue to assess opportunities for their harsh-environment assets in other regions where longer-term and more fruitful opportunities are appearing meaning that it is unknown when these rigs will return to the North Sea. Westwood also poses the question If demand does indeed continue to grow from 2024 onwards, will there be enough supply to cover it and how much will operators be willing to pay for them?