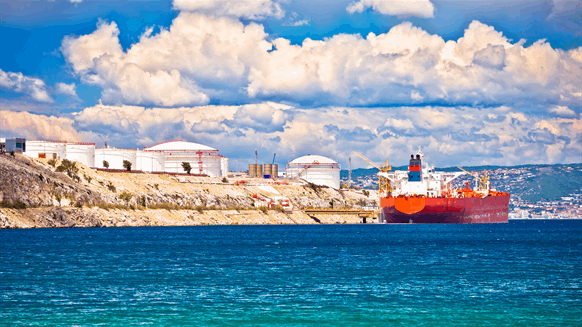 The German case for LNG import terminals rests on the need to increase the country's gas imports as North Sea gas production declines.

The timing of the German announcement coincides with vociferous opposition to the Russian pipeline from formerly communist east European countries as well as the United States. The latter’s opposition is twofold. First, the U.S. wishes to gain access to the German market for its burgeoning LNG exports, and secondly there are energy security concerns posed by increasing reliance on Russian pipeline gas in Europe as a whole.

Sabine Pass, Cove Point and Corpus Christie, LNG export terminals sited along the US Atlantic coast, are to be joined by Cameron and Freeport export terminals coming on line this year, at a time when U.S. LNG export capacity is expected to double from 4.9 billion cubic feet per day (Bcf/d) by December 2019, according to the EIA. Currently, U.S. LNG deliveries to Europe are destined for GATE in Rotterdam in Holland, Zeebrugge in Belgium and Calais in France for onward distribution by direct gas pipeline to Germany.

The case for German LNG terminals

The German case for LNG import terminals rests on the need to increase the country’s gas imports as North Sea gas production declines. Also, demand for gas is expected to rise as coal and nuclear plants are closed. LNG imports will therefore not only increase energy security but (so the argument goes) also strengthen Germany’s negotiating position with Russia’s Gazprom and LNG exporters such as Russia’s Novatek, Qatari’s Qatargas, and the U.S. A similar viewpoint underpinned construction of LNG terminals in the Baltic states of Poland, Lithuania and Estonia.

Proposals for two German LNG import terminals are supported both by Rudolf Huber, President of LNG Austria, and by President Donald Trump with his “America First” policy, because gaining direct access to the large German gas market and constricting Russia’s access, fulfils both economic and political objectives.

An onshore facility is estimated to cost at least half €1 billion (USD $1.1B) but much less for a Floating Storage Regasification unit for transferring LNG to the mainland. While none of the promoters have arranged financing, government aid is likely to be forthcoming.

However, Europe already has some 30 LNG import plants and European overcapacity stands at 25 percent according to Deutsche Welle. Therefore, some argue a new German LNG import terminal is unlikely ever to make a direct profit. But, things are not as straightforward; as Huber points out, “North Western Europe must play the flexibility-giver to LNG in the future as it's the only place on earth to be able to do so…. It's the destination of last resort for traders, which means that utilization ratios will be meaningless in the future in this part of the world.”

Nonetheless, the commercial reality cannot be ignored. U.S. LNG is unlikely to be competitive with Russian piped gas, which can be pumped directly into the grid without the elaborate processing required for LNG. “Compared to other gas sources, liquefied gas is simply not competitive,” states Thomas Kusterer, CFO at energy utility EnBW.

Nevertheless, Huber argues,” if those terminals are structured the right way, they will certainly not be White Elephants. This is old LNG thinking. LNG terminals in North Western Europe will in the future be able to make money without turning over physical LNG cargo.”