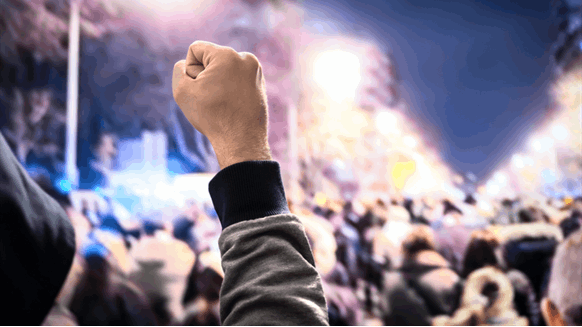 Bernard Looney, who succeeded Bob Dudley as BP's group chief executive on February 5, contended with protests at the company,s headquarters on his first day in the new role.

Bernard Looney, who succeeded Bob Dudley as BP’s group chief executive on February 5, contended with protests at the company’s headquarters on his first day in the new role.

In the early hours of this morning, Greenpeace activists blocked all six office doors around the building in St James’ Square, London, according to the organization’s website. Activists also blocked the road outside the headquarters, Greenpeace revealed.

“BP’s new CEO Bernard Looney is visiting employees in Germany today, but he understands the frustration and anger of protestors in London,” BP said in a company statement in response to the protests.

“He shares their deep concern about climate change and will set out his low carbon ambition for the company next week. He hopes that what he has to say then will give people a sense that we get it and are very serious about working to address the problem,” BP added.

Dudley became group chief executive on October 1, 2010. He started his career at Amoco Corporation in 1979 and became general manager for strategy at the company in 1997. In 1999, following the merger between BP and Amoco, Dudley was appointed to a similar role in BP.

Looney had run BP’s upstream business since April 2016 and has been a member of the company’s executive management team since November 2010. He joined BP in 1991 as a drilling engineer .

Commenting on his new job back in October, Looney said, “I am humbled by the responsibility that is being entrusted to me by the board and am truly excited about both the role and BP’s future”.