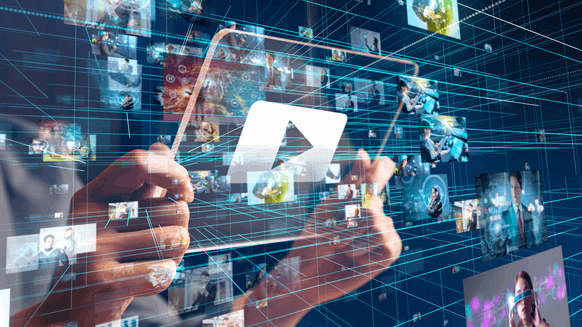 The service companies that map underground pockets of oil, drill the wells and lift crude from miles below are generating vast new amounts of data they never before realized could be valuable.

(Bloomberg) -- A battle for big data is brewing in the oil patch.

The service companies that map underground pockets of oil, drill the wells and lift crude from miles below are generating vast new amounts of data they never before realized could be valuable. But their exploration customers are essentially saying hands off to anything coming out of their wells, including the streams of zeros and 1s.

“There’s no doubt to me, we are producing two resources: the oil and gas, and the data,” said Philippe Herve, a Schlumberger Ltd. veteran who now helps oil companies use artificial intelligence at SparkCognition. “The oil and gas is very clear: it belongs to the operator. But who owns the data?”

Answering that question will mean real money for a global industry climbing out of the worst crude crash in a generation. An industry that only uses about 1 percent of the data it generates, according to Baker Hughes, is trying to harness it to see where to pump more oil faster for less money. Transforming to a digital oil field could add almost $1 trillion to the world’s economy by 2025, according to a 2015 study by Oxford Economics and Cisco Consulting Services.

To the service companies specifically, owning the data -- enough to fill 20 million file cabinets since 2010 alone -- would mean a whole new revenue stream, perhaps as they sell subscriptions to huge data libraries.

“It’s like Netflix for oil and gas,” said John Gibson, an advisor at Tudor Pickering Holt & Co. who previously ran the oil-services business for Halliburton Co. “Imagine that all data is like a movie that many different people want to watch, but they want to watch it at different times.”

To the producers, though, owning that data means one less check they’d have to write. And it would ensure competing producers couldn’t see their data while stealthily moving into a new field. EOG Resources Inc., dubbed by one of its analysts as the Apple Inc. of the oilfield, is widely considered a leader among explorers for bypassing oilfield service companies to generate its own in-house innovations.

“Data is king and one of our most valuable resources,” Sandeep Bhakhri, chief information and technology officer at EOG told investors on a conference call last year. “You have to own the data. You cannot outsource its collection, analysis or delivery.”

Oil companies have for years bought relatively straight-forward data such as seismic files or drilling logs that contractors gather for their customers. The newer, larger batch yet to be harnessed is coming straight off the oilfield equipment itself -- the rigs, pipes, pumps and vales.

“They also have value because they’re revealing properties of the reservoir that before you didn’t think about,” said Barry Zhang, CEO of the artificial-intelligence provider Quantico Energy Solutions.

Estimated spending on digital technology amounts to less than 10 percent of the $8 million average cost of an onshore well in the U.S., said James West, an analyst at Evercore ISI. But that’s expected to climb. More than 7 out of 10 industry executives surveyed by Accenture and Microsoft said they plan to spend more or significantly more on digital over the next three to five years. Nearly 40 percent said they’re worried about falling behind peers if they don’t continue to invest in digital.

Service contracts today are already being drafted with the data-ownership question in mind. And while there’s always been a section addressing data, it’s far more important now, Brian Richards, a managing director at Accenture, said in a phone interview.

Devon Energy Corp. has been dealing this over the past year as it’s embarked upon rewriting all of its service contracts during the downturn. The older contracts had maybe a line or two addressing data ownership, said Garrett Jackson, vice president of drilling and completions for the Oklahoma City driller.

Pierre BERGEY  |  March 23, 2018
I am puzzled by this article. To my knowledge, key data related directly or indirectly to subsurface is typically not owned by contractors or even producing companies but by state entities. Producing companies typically have access and legal rights to more data than state entities because those only require, for practical reasons, only a fraction of the data generated (typically the key raw data). Except in few location such as UK, Canada, etc. state actors are and have been for very long time overwhelmingly reluctant to give legal access to such data to anyone. Operating companies typically behave in the same manner for the part of the data they have privileged access (typically more interpretative data and or data with higher granularity). Contractors rarely have ownership of data or even unlimited data access rights; their access to the data is typically bounded to the purpose defined in a contract. A lot of data goes through contractors but this is typically associated with very little usage rights. Contractors will have trouble selling what they do not own.
Joseph Rochefort  |  March 21, 2018
ALL data is the property and owned exclusively by the entity who pays the contractor to perform the work. In-house use of data has always been the preferred means of generating in-house confidential data and plays and prospects. Logging companies may hold the logs but they do NOT OWN the log data unless ownership has been specifically granted to the contractor by and from the entity who paid for the data in the first place. Any contractor who wishes ownership simply must put such parameters in the original contract and the original payiing entity who gives the data away does not understand the value of such data. This is why is is so imperative to have contacts with the majors and independents who know the value of the data and to be able to gain access, usually thru data trades that are either restricted or unrestricted, between various owners of data. Geologic and Geophysical and other data data is very very valuable to any owner of the data and should be treated as such. There is so much confidential data in the oil and gas industry that anyone who seeks public data gains access to lees than 25 % of the data that is available..
Flor Dimassi, CEO, GlobalSpeak Translations  |  March 20, 2018
Excellent article, thank you for sharing. Since Data knows no boundaries, it impacts across borders, language and cultures. As you state, "Rewriting Contracts", will need to be considered. This will impact cross-border opportunities, such as the developing projects as a result of the Mexico Energy Reform. This then raises the question of language and translation services. GlobalSpeak Translations is a specialty translation provider with a specific focus in the energy sector, and we know the industry language. Data may be the numbers, but its the local language that builds the bridge of cooperation.
RELATED COMPANIES
Company: Schlumberger more info
Company: Devon Energy more info
Company: EOG Resources, Inc. more info