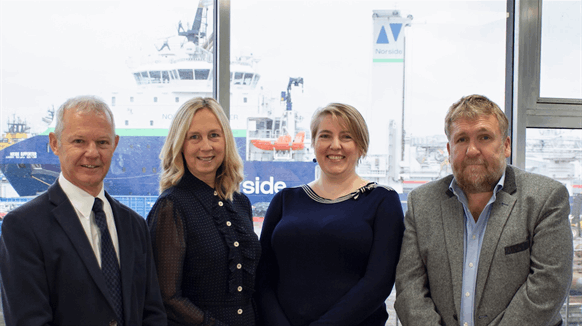 Montrose Port Authority has added a new trio to its board of non-executive directors.

Eilidh Smith, Susan Smart and Graham Penman have all been named to Montrose Port Authority’s board of non-executive directors.

With over 15 years of experience, Eilidh Smith is an Unlimited Master Mariner who has been involved in the ports industry and the Port Marine Safety Code in general as part of her work as a marine consultant which saw the start of her working relationship with Montrose Port. Since many of her clients regularly used Montrose Port, she became a frequent visitor to the town.

Already having experience in the Oil and Gas sector, Smith joined ScottishPower Renewables in 2021 as the Marine Assurance Manager for Offshore Operations & Maintenance and is where she currently works.

“The ports industry on the East coast of Scotland is changing significantly due to the focus on the energy transition from oil and gas to renewables, so I’m really excited to be able to be part of this change,” says Eilidh Smith.

Also new to the board for 2022 is Susan Smart who held positions as Head of Skills Strategy and Head of Oil and Gas for the government skills body, the Engineering Construction Industry Training Board.

After a 30-year career in the upstream oil and gas industry, Smart is looking forward to bringing her background in workforce development and stakeholder management to the board as well as her familiarity with the energy transition.

Graham Penman brings more than 35 years of engineering, operations and project management experience as a new board member to Montrose Port Authority having worked in both the oil and gas and marine industries.

Through running his own engineering company and working in senior management roles with several subsea companies, Penman has advanced knowledge of subsea installation engineering, vessel fit-out and mobilizations as well as an experienced track-record of delivering major capital engineering, construction and subsea inspection, repair and maintenance (IRM) projects across the world.

In his new role as a non-executive board member to Montrose Port, he is looking forward to helping solidify Montrose’s status as a port of choice for renewable energy, oil and gas and decommissioning as well as retaining core industries and local jobs.

Montrose Port is strongly focusing on the offshore wind projects, and speaking of this new sector, head of Montrose Port board, Chairman Peter Stuart, said “we also continue to look at other opportunities in our traditional sectors of oil and gas and general cargo, both of which continue to be the mainstay of the port’s business.”