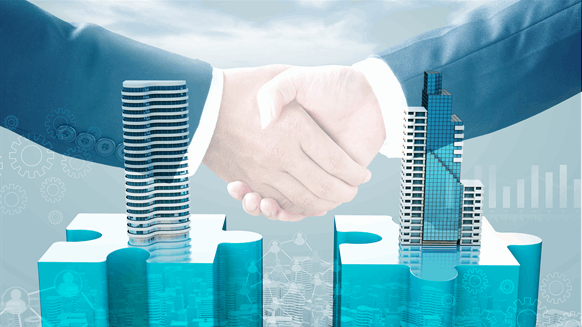 PwC's quarterly report shows that the third quarter's deal value is the highest in four years.

Oil and gas M&A activity in the United States hit a high note in 3Q to the tune of $122.8 billion – making it the highest deal value since 3Q 2014, according to PwC’s quarterly report released Oct. 25.

A whopping 82 percent of the 3Q deal value was driven by mega deals (classified as being at least $5 billion), including two in the upstream sector.

Drillinginfo recently took a look at the 3Q’s upstream deals, which they reported valued at $32 billion, a record high since 4Q 2012.

PwC found that MLP restructurings in the midstream sector was responsible for mega deals of $80.7 billion that generated much of 3Q’s deal value. Investors are seeking midstream assets to alleviate operational bottlenecks related to takeaway capacity, specifically in areas like the Permian, where production has soared.

“Mega deals and affiliate transactions, that’s the story of the 2018 third quarter,” Joe Dunleavy, PwC’s U.S. Energy Utilities & Mining Deals Leader, said in the report. “But, will dealmakers remain satisfied with the thrill of a tax restructuring, or will strategic acquisitions bring the sizzle back to deal-making activity and drive real value to levels not seen in multiple years? Probably both.”

PwC’s report found that while the oil and gas industry is unlikely to see the 224 deals it saw in 2017 (at 3Q end there were 141), the total deal value of $234.5 billion for the first nine months of 2018 surpassed nine-month deal values for each year of the last decade.

PwC forecasts that the following will impact the industry in the future: