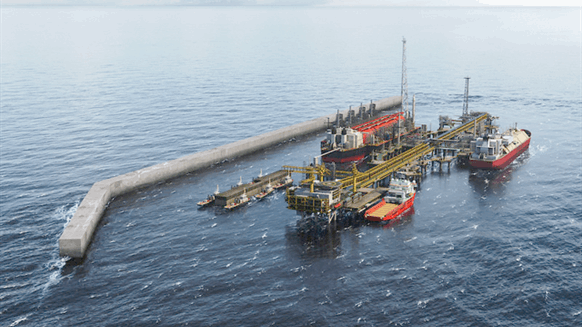 The company noted the value of the SPS fabrication subcontract ranges from US$1 million to US$50 million. Earlier this year, it received another GTA contract with Baker Hughes Co. from BP plc.

“Fabrication for both the SPS and subsea, umbilicals, risers and flowlines (SURF) scope for the Greater Tortue Ahmeyim project will now be undertaken in McDermott’s yard in Batam (Indonesia), which enables a fast-tracked fabrication schedule to be delivered,” Ian Prescott, McDermott’s senior vice president for Asia Pacific, said in a written statement emailed to Rigzone Thursday.

McDermott noted that its SPS fabrication scope of work includes:

BP and partners Kosmos Energy, Petrosen and SMHPM took a final investment decision last December to develop Phase 1 of GTA. As Rigzone has reported, GTA will produce and process gas from an ultra-deepwater subsea system and mid-water floating, production, storage and offloading (FPSO) vessel and transfer the gas to a floating liquefied natural gas (LNG) near the Mauritania-Senegal border. BP has stated the project will provide approximately 2.5 million tons per annum of LNG for global export and domestic use in the West African countries.

“It represents the beginning of a multi-phase project that is expected to deliver LNG revenues and gas to Africa and beyond for decades tom come,” BP Upstream Chief Executive Bernard Looney commented in a Dec. 21, 2018, written statement in reference to GTA. “We see this as the start of a new chapter for Africa’s energy story and are honored to work alongside our partners and the governments of Mauritania and Senegal.”

Kosmos discovered the GTA field in 2015.

Companies that have won GTA contracts besides McDermott and Baker Hughes include TechnipFMC, and KBR, Inc. Also, BP reported in 2018 that Saipem and the Eiffage Saipem Consortium won the GTA Phase 1 design contracts for the LNG Hub/Terminal Marine Civils and LNG Hub/Terminal Facilities components, respectively.