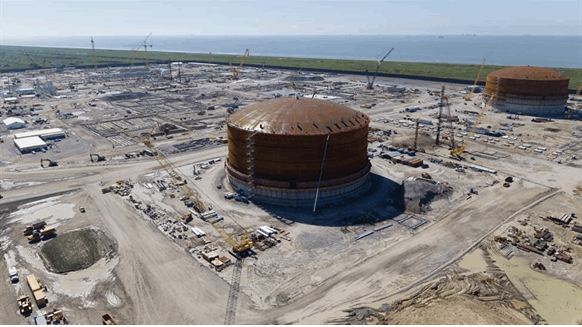 The developer of Calcasieu Pass LNG reported Wednesday that it has achieved another milestone at the site of the southwestern Louisiana liquefaction project.

According to Venture Global, CB&I air-raised the 1.8-million-pound tank dome and assembly into place. The developer pointed out that air-raising permits better and safer access and expedites the construction schedule, explaining the technique enables the roof to be erected concurrently with the shell. The firm added that CB&I raised the tank dome in 80 minutes using 0.25 pounds per square inch of pressure.

Venture Global also stated Wednesday that the first modules for the export facility’s 720-megawatt combined cycle gas turbine power plant have arrived at the site, located at the intersection of the Calcasieu Ship Channel and the Gulf of Mexico. The firm added that key components of the gas insulated switchgear (GIS) have been installed on-schedule. Moreover, the site has begun receiving and setting modules for the air-cooled condenser, the company noted.

The Calcasieu Pass facility will boast 10 million tons per annum of LNG production capacity. Venture Global projects that commercial operations will start in the fall of 2022.

Jay  |  May 23, 2020
While they have frozen pay for over a year. No Hiring and swimming in work and short handed. Also just gave notice that they aren't matching 401k contributions anymore. BAIL from this place.
RELATED COMPANIES
Company: McDermott International more info