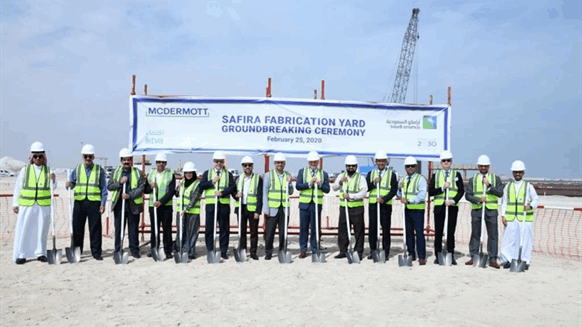 McDermott International, Inc. reported Tuesday that it has broken ground on the SAFIRA Fabrication Yard: its new fabrication facility within the King Salman International Complex for Maritime Industries and Services in Ras Al-Khair, Saudi Arabia.

Developed by Saudi Aramco, the overall King Salman complex site is expected to be the Middle East’s largest maritime industries compound based on production, capacity and scale, McDermott noted in a written statement emailed to Rigzone. On March 26, 2019, McDermott stated that it had signed a land lease agreement with Saudi Aramco for the large-scale facility, which will be used to fabricate offshore platforms and onshore/offshore modules.

“The Saudi Aramco team has been working tirelessly for a number of years to create the infrastructure from which McDermott and the other anchor tenants within the complex are able to establish their facilities,” commented Mohammad Al Assaf, Saudi Aramco’s vice president of new business development.

“With McDermott breaking ground, we move a step closer to the complex acting as a hub for job creation and supply chain development in accordance with Saudi Vision 2030 objectives,” he said.

According to McDermott, the new facility will encompass an area of approximately 13 million square feet (1.2 million square meters). The firm stated the site will feature offices, pre-fabrication shops, blasting and painting shops and large assembly shops capable of fabricating platforms and modules for offshore and onshore projects for Saudi Aramco and other customers. The facility will boast up to 861,113 square feet (80,000 square meters) of covered shops with new automation technology as well as 1,903 feet (580 meters) of reinforced bulkhead to provide marine access, McDermott added.

Another executive pointed out the project will enable McDermott to become the first engineering, procurement and construction contractor to develop a full-scale fabrication facility in Saudi Arabia.

“(W)e will build on generations of knowledge and experience within McDermott to create something extraordinary,” stated Linh Austin, McDermott’s senior vice president for the Middle East and North Africa. “But this project is also about people, and we will continue building our in-Kingdom engineering and procurement offices as well as sourcing and developing local talent on all levels in the company.”

McDermott also stated the new yard complex – in addition to fabrication infrastructure – will include employee accommodations, medical facilities and recreation areas. The firm contends the amenities will help it to attract and retain a workforce with a significant Saudi national content.