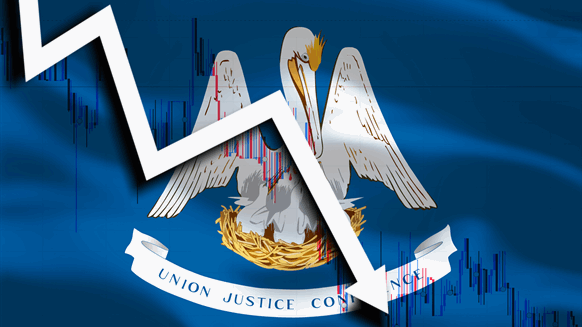 A recent survey of Louisiana Oil and Gas Association (LOGA) members shows the nearly one-quarter of the Pelican State’s oil industry-related workforce has potentially already been laid off amid the severe market downturn.

“Our members have indicated they’ve already been forced to lay off 23 percent of their workforce, and the large majority are now taking steps to shut-in production,” LOGA President Gifford Briggs remarked in a written statement emailed to Rigzone.

LOGA’s latest online anonymous “point-in-time” survey of its member companies – conducted April 22 to 29 – also revealed that 77.5 percent of Louisiana’s operators have already begun taking steps to shut-in production. The organization counts 450 exploration and production and service companies among its ranks.

“We featured these outcomes would take place by mid-to-late May, but the crushing weight of the crisis is taking hold much quicker than expected,” continued Briggs. “Without a doubt, we need federal and state policymakers to take immediate action to help mitigate further losses from these extreme market conditions.”

In addition to the layoff and well shut-in figures, LOGA’s in-house survey of its members found:

“We’re one of the largest employers in Louisiana with the highest average wages,” Briggs stated. “Just imagine what shut-ins and company closures mean for individuals and communities. These are real dollars and their lack is going to be felt all across the state.”

“Of the things we can control, we must take bold action to enact immediate changes,” Briggs remarked. “We are looking forward to working with the legislature and the administration to figure out how to keep wells flowing and keep people employed as long as possible.”

“The prior year saw some contraction prior to the pandemic and price war,” the TXOGA spokesperson said regarding the change in Texas upstream jobs from March 2019 to March 2020. “These numbers do not reflect the significant job losses as a result of the current dynamic. We need the U.S. and global economy to go back to full speed so our industry can put people back to work.”