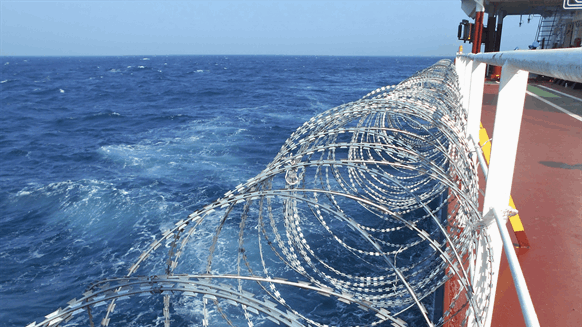 'The hiatus comes off the back of a period of unusually high activity'.

“The hiatus comes off the back of a period of unusually high activity, particularly within the Strait of Malacca and Singapore where seven incidents were reported within a five-day period; all incidents continue to be focused around the central theme of robbery and theft of cargo,” the MSTA stated.

“Incidents within the Indian Ocean and West Africa saw a return to familiar themes of Iranian drone strikes and fuel theft. Incidents in both areas within the last reporting period have indicated a lull in activity,” the MSTA added.

Looking at the imposition of the Russian oil cap, the MSTA highlighted that it remains to be seen what impact this has across wider markets and Russian activity.

On December 3, the European Council announced that it had decided to set an oil price cap for crude oil and petroleum oils and oils obtained from bituminous minerals which originate in, or are exported from, Russia, at $60 per barrel. The council said the level of the cap was established in close cooperation with the Price Cap Coalition and highlighted that it would become applicable as of December 5, 2022.

On October 6, the council adopted a decision prohibiting the maritime transport of Russian crude oil, as of December 5, and petroleum products, as of February 5, 2023, to third countries, and the related provision of technical assistance, brokering services or financing or financial assistance.

In its previous MSTA, which was released on November 28, Dryad highlighted that a recent surge in maritime crime activity within the Strait of Malacca and Singapore had seen six incidents reported within the last reporting period.

“Incidents continue to represent a significant uptick in activity across the past 12 months,” Dryad noted in that MSTA.

In its previous MSTA, Dryad also noted that the B OCEAN was subject to a second hijack and fuel theft this year and that geopolitical tensions continue to define the maritime security narrative within the Middle Eastern Gulf.