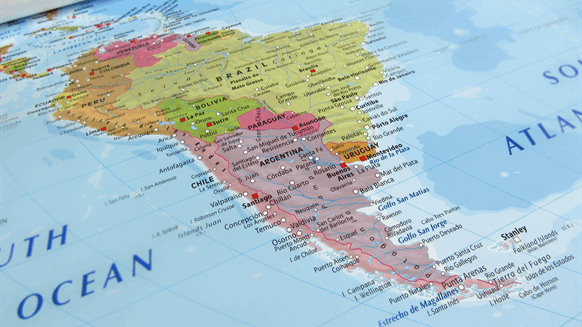 GeoPark Limited has discovered the new Jauke Oeste natural gas field in the Fell block, which is located in the Magallanes Basin in Chile.

GeoPark Limited reported Tues that it has discovered the new Jauke Oeste natural gas field in the Fell block, which is located in the Magallanes Basin in Chile.

“Congratulations and thanks again to GeoPark’s creative exploration team for continuing to open up new geological plays and build on our steadily expanding production, reserve and resources base,” GeoPark CEO James F. Park said in a written statement.

GeoPark, operator with a 100-percent working interest in the Fell block, noted that it drilled and completed the Jauke Oeste 1 exploration well to a total depth of 9,596 feet (2,925 meters). The firm stated a production test – through different choke sizes – in the Tobifera formation showed an average production rate of 4.4 million standard cubic feet per day of gas, or 729 barrels of oil equivalent per day (boepd), and 52 barrels of oil per day of condensate with a wellhead pressure of 3,141 pounds per square inch.

“Additional production history is required to determine stabilized flow rates of the well and the extent of the reservoir,” GeoPark noted, adding that surface facilities are in place, the well is in production and gas and condensate are already being sold to offtakers.

Elsewhere in Chile’s Magallanes Basin, GeoPark plans to focus on oil prospects during the first quarter of 2020. The company noted that it will spud the Leun 1 exploration well in the wholly owned and operated Flamenco block this month. It also stated that subsequent exploration wells will include Huillin 1 in the Isla Norte block (GeoPark-operated, 60-percent working interest) and Koo 1 in the Campanario block (GeoPark operated, 50-percent stake).

As GeoPark’s website shows, the Camapanario and Flamenco blocks are southeast of the Fell block and east of the city of Punta Arenas.