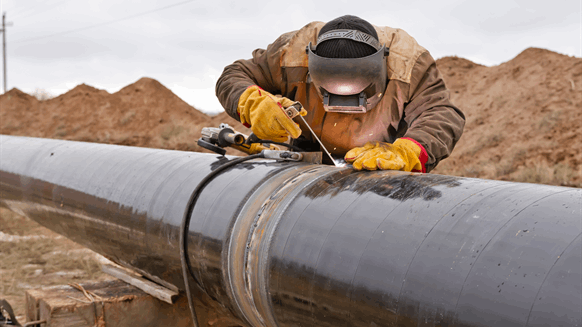 “We are excited to be moving forward on this much-needed infrastructure project, with construction planned to commence in the first quarter of 2018,” stated Kinder Morgan Natural Gas Midstream President Duane Kokinda. “We’re very pleased to have secured the commitments needed for all parties to proceed.”

The approximately $1.7 billion natural gas pipeline will comprise 82 miles of 36-inch pipeline and 365 miles of 42-inch pipeline, Kinder Morgan stated. The company said the conduit, which will transport up to 1.92 billion cubic feet per day (Bcf/d) of natural gas, will originate at the Waha Hub near Coyanosa, Texas, in the Permian Basin and terminate near Agua Dulce, Texas. In addition, the project will include an approximately 50-mile Midland Lateral portion.

"The takeaway capacity we have secured will allow greater flexibility and market optionality for our Permian production, including increasing volumes from our recent discovery at Alpine High," Brian Freed, senior vice president with Apache's Midstream and Marketing unit, said in a separate statement. "Our participation in the GCX project ensures we will be able to deliver gas to the Gulf Coast where we can access growing market demand and Gulf Coast basis pricing. Today's announcement supplements previously contracted shipping capacity from the region and complements the significant field infrastructure we have built to accelerate the development program at Alpine High."

According to Kinder Morgan, approximately 85 percent of the project capacity is subscribed and committed under long-term binding transportation agreements. Kokinda stated the remaining available capacity may be offered as part of a binding open season in January 2018.

Kinder Morgan said it expects GCX to be in service in October 2019, pending the receipt of necessary regulatory approvals.