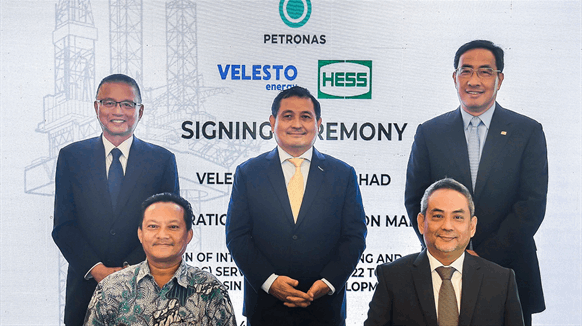 Hess has chosen rig owner Velesto Energy to carry out the drilling work on a project off Peninsular Malaysia.

U.S. oil and gas firm Hess has chosen rig owner Velesto Energy to carry out the drilling work on a project off Peninsular Malaysia.

Velesto Energy said that its subsidiary Velesto Drilling received a letter of award from Hess for the provision of the integrated rig, drilling, and completion (I-RDC) services. The contract given to Velesto Drilling was awarded by Hess Exploration and Production Malaysia which is a Production Arrangement Contractor of Petronas.

The contract for the provision of i-RDC services, includes the provision of Velesto’s NAGA 5 rig, with an estimated contract value of $135 million. NAGA 5 is a premium independent-leg cantilever jack-up drilling rig with a drilling depth capability of 30,000 feet and a rated operating water depth of 400 feet.

The contract covers 14 wells and will start in the fourth quarter of 2022 on Hess’ 2022 to 2024 North Malay Basin full field development campaign.

“The i-RDC services contract is the first jack-up rig drilling contract to be awarded through an i-RDC arrangement in Malaysia. This is a step change in Velesto’s business offering as it demonstrates our unique value proposition that paves the way for closer collaboration among the client, lead contractor, and services partners,” President of Velesto, Megat Zariman Abdul Rahim said.

“We are partnering with Halliburton as our technical partner to provide these services to drill and complete14 offshore wells. As our service portfolio expands through this strategic partnership, we are well-positioned to secure more potential opportunities to cater to the needs of our clients,” he added.

Hess’ North Malay Basin project comprises 10 discovered gas fields tied to a gas terminal onshore. According to Hess, these gas fields are being developed on a phased basis to support energy demand in Peninsular Malaysia.

The first phase of this gas project involved the installation of an Early Production System over the Bunga Kamelia field and the first gas for Phase 1 of full field development was achieved in 2017, just three years after the project was sanctioned. Phase 2 achieved the first gas in 2019 while the first gas from Phase 3 of this project came in September 2022. This resulted in a total production of 400 million scfd.