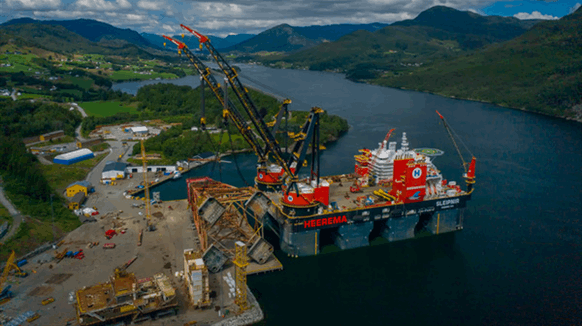 The SSCV Sleipnir delivered the Jotun-B jacket to the a decommissioning site in Vats, Norway. PHOTO SOURCE: Heerema Marine Contractors

The SSCV successfully removed the 8,100-metric-ton Jotun-B jacket for Vår Energi in the Norwegian sector of the North Sea, HMC noted in a written statement. The platform had been installed in the Jotun field since 1998, and last year Heerema’s Thialf deepwater construction vessel removed the topsides and conductors, the contractor added.

According to HMC, the jacket removal began on July 11, 2020, at the Jotun field approximately 200 kilometers west of Stavanger, Norway. The firm pointed out that 2.7-meter-diameter and 80-millimeter-wall-thicknes skirt piles were cut subsea, noting that aspect of the project was unprecedented. In addition, the company stated that it fabricated a 40-meter-long spreaderbar within a two-millimeter tolerance “for a tight, but perfect fit.”

HMC completed the decommissioning work by offloading the Jotun-B jacket at the AF Miljøbase facility in Vats, Norway on July 16. The firm pointed out the project concluded one day ahead of schedule, adding that up to 99 percent of the Jotun-B jacket will be recycled.

“(W)e set records to break them, and we are proud to have worked alongside our client Vår Energi to complete the Jotun-B removal with mighty Sleipnir safely, sustainably and in the shortest possible time,” remarked Heerema CEO Koos-Jan van Brouwershaven.