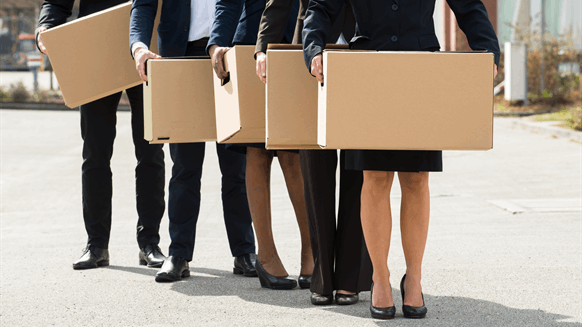 The Houston-based oilfield services giant will be closing its office in El Reno, Oklahoma and laying off more than 800 employees.

Halliburton Energy Services, Inc. is closing its facility in El Reno, Oklahoma, and as a result, laying off 808 employees, according to a notice sent to the Oklahoma Office of Workforce Development on Monday.

The El Reno field camp is located at 6100 East Highway 66 and is about 30 miles west of Oklahoma City. It housed the company’s remote operations command center and frac crews.

The layoffs are expected to be permanent and affected employees do not have bumping rights.

Halliburton spokesperson Emily Mir said the company would be relocating a majority of its operations in El Reno to its Duncan field camp in Duncan, Oklahoma.

"We made this decision in response to reduced activity levels in Oklahoma and the greater Mid-Continent area," Mir said in an email sent to Rigzone. "Consolidating our operations takes advantage of Halliburton’s extensive footprint and synergies in the Duncan area including a strong employee hub and manufacturing expertise."

She said a majority of employees were offered relocation.

"Making this decision was not easy, nor taken lightly, but unfortunately, it was necessary as we work to align our operations to reduced customer activity," she said.

Halliburton, like many other oilfield services companies, has had a challenging year.

The company laid off 650 employees in its Rockies region in early October and in its third quarter earnings call later that month, CEO Jeff Miller described a “softened” market for drilling and completions services in North America.

He said Halliburton would “rather err on the side of stacking than work for insufficient margins and wear out our equipment.”

Miller also said the company planned to streamline its operations and corporate functions.

Mark McMurtry  |  December 08, 2019
Streamline!!!! Streamline what in the corporate office?. You are laying of all of your revenue producers. With out those employees there's no reason for office personnel!!!! Wheres the logic?
Mike Chandler  |  December 07, 2019
The economy is working for once across the U.S. In simple layman's term. Stop it with the greedy high tech set up to fail tactics. People want to work. They want to keep their jobs. Get big government stipulations out of the way. legally!!. Oklahoma is situated in the middle interior of America. Oklahomans are people too.
Jim Moody  |  December 06, 2019
I will be voting my shares for the next layoff to be the CEO and CFO. This layoff is a sign of incompetence in the board room.
MICHAEL DOYLE  |  December 03, 2019
"Wall Street has shifted its expectations for the industry. The call now is for...sustainable free cash flow for return to shareholders." Rob McBride, Jesse Mercer and Brendan Nealon, Enverus Energy
RELATED COMPANIES
Company: Halliburton Company more info