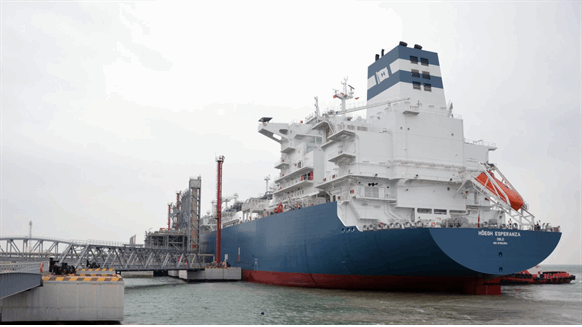 Germany inaugurated its first floating LNG terminal earlier this week. It is part of the government's plan to replace Russian gas by importing LNG.

Germany inaugurated its first floating LNG terminal earlier this week. It is part of the government’s plan to replace Russian gas by importing LNG.

Following Russia’s attack on Ukraine, a halt in the supply of gas from Gazprom, and the subsequent destruction of the Nord Stream 1 pipeline, Germany is missing about 50 bcm of gas in yearly deliveries. New infrastructure to enable importing LNG is seen as a viable replacement.

On November 15, the economy minister of the German state of Lower Saxony Olaf Lies toured the port of Wilhelmshaven. After six months, construction of the infrastructure to support an inbound floating LNG terminal (FSRU) – a pier, pipelines, and electricity lines – was completed.

“Germany is looking to Wilhelmshaven today. The new LNG terminal is a big step towards a secure energy supply,” highlighted Lies, noting the early decision to focus on Wilhelmshaven and existing port infrastructure as the key drivers of speed.

The completion in 194 days represented an unprecedented pace of construction in Germany, made possible by permitting exceptions and forgoing environmental impact assessments. In mid-December, the ship Hoegh Esperanza is set to arrive. It was previously on three-year deployment in the Chinese port of Tianjin. A subsequent deployment in Australia had been canceled on grounds of environmental concerns.

The FSRU can regasify a minimum of 5 bcm of LNG annually, with a maximum capacity of 7.5 bcm. It will feed the gas into the German gas grid through a pipeline with an annual capacity of 10 bcm. A second FSRU is expected in late December, followed by another three next year. In total, the German government hopes to replace 50 to 60 percent of Russian gas with LNG in 2023.

Environmental groups, who were largely left out of the construction process, have voiced concerns about pollution. Uniper, the ailing gas giant and operator of the infrastructure, is expected to clean its facilities using chlorine, which will then be vented into the sea.

“A creeping chemical accident looms in Wilhelmshaven and at the other LNG sites. According to the application documents, Uniper wants to discharge ten times as much biocide into the North Sea with its LNG terminal vessel as was previously deemed acceptable at a comparable location,” Sascha Müller-Kraenner, CEO of Environmental Action Germany (DUH), said.