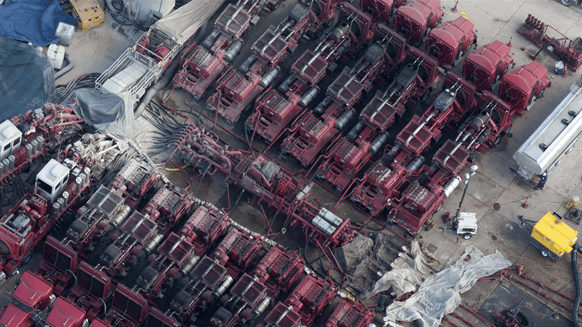 Market-watcher says downstream should exert considerable influence on frac spread activity through the first half of 2020.

The number of frac spreads in U.S. shale basins has increased by 40 over the past three weeks and totals 315, according to Primary Vision LLC, which tracks the upstream industry’s health based on hydraulic fracturing activity.

Matt Johnson, principal of Primary Vision, told Rigzone that the downstream oil and gas sector should exert considerable influence in the realm of frac spread activity throughout the first half of 2020.

“Simply put, there’s too much supply in the market of refined products, particularly gasoline,” commented Johnson. “With continued pressure on demand we could see operators slow down completions as they become unaffordable.”

Johnson added that drilling appears to be in a “holding pattern” as the U.S. rig count hovers near the 800 mark. Baker Hughes Co.’s most recent U.S. rotary rig count stands at 790 – 255 fewer rigs operating compared to a year ago.

“Clearly pressure pumpers have responded to a lack of demand for their services and pricing pressure by retiring equipment,” he said.

For instance, Johnson pointed out that over the past 18 months approximately 10 million horsepower of equipment has succumbed to:

Although pressure pumpers have had to contend with the above list of undesirable outcomes for nearly two years, Johnson added that the coronavirus outbreak has proven to be a more recent threat.

“The surprise is the power of the coronavirus and its immediate and potentially long-term effects on oil/gas demand,” he said. “This is a story we’re following as more information becomes available.”

“The oil and NGL have to go somewhere,” explained McNulty. “And greater distillation capacity in the U.S. has produced higher-value distillates to sell in international markets that need and want the products. We’ve definitely seen more profitable distillates and jet fuel taking more space in the refined products stack from gasoline.”

Significant volumes of U.S. refined products are increasingly reaching international markets, continued McNulty. Moreover, he pointed out that various development projects on the U.S. Gulf Coast will boost refined product export capacity. He was quick to add, however, that the export surge is largely bypassing Europe.

“Europe is just not growing at all, but the developing world is,” McNulty said. “Rapidly. China and India are the largest consumers of exported U.S. refined products.”

Although demand in China will dip given the coronavirus outbreak, McNulty said that he believes it will rebound faster than many think. Moreover, he views the International Maritime Organization’s new “IMO 2020” low-sulfur marine fuel regulation as a “great opportunity” for refineries with more complex processing configurations.