Fire Breaks Out on Oil Tanker 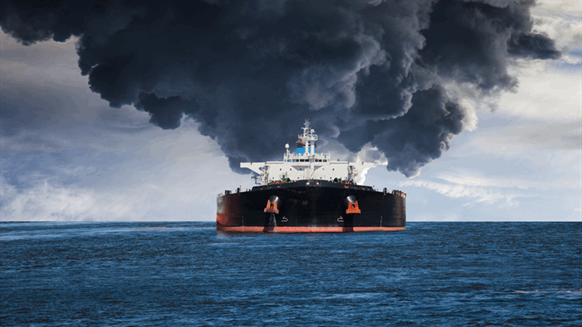 A fire has broken out on the Panama-flagged New Diamond oil tanker.

A fire has broken out on the Panama-flagged New Diamond oil tanker 38 nautical miles off Sangamankanda Point east of Sri Lanka, the country’s navy announced on Thursday.

The navy said it responded immediately to a distress signal of an explosion of a boiler followed by a fire in the main engine room. According to the distress signal received by the Maritime Rescue Coordinating Center in Colombo, the oil tanker was manned by 23 crew members including five Greek and 18 Philippine nationals.

As of September 4, the Sri Lanka Navy, Air Force, Ports Authority, the Indian Navy and the Indian Coast Guard were still working to contain the spread of the fire on board the oil tanker, the navy outlined. There is no risk of oil leakage from the vessel to the sea so far, according to the navy, which revealed that one Philippine national of the crew has not been located since the incident.

“In accordance with the instructions given by the health sector in the current Covid-19 emergency situation, arrangements have been made to direct the rescued crew members to the shore for treatment and isolation following the proper health instructions,” the navy said in a statement posted on its website.

“The navy has been entrusted with the responsibility for maritime search and rescue operations in Sri Lanka’s search and rescue region. Remaining true to its mandate the Navy has responded to distress calls of this nature, made by ships and craft, on numerous occasions previously,” the navy added in the statement.