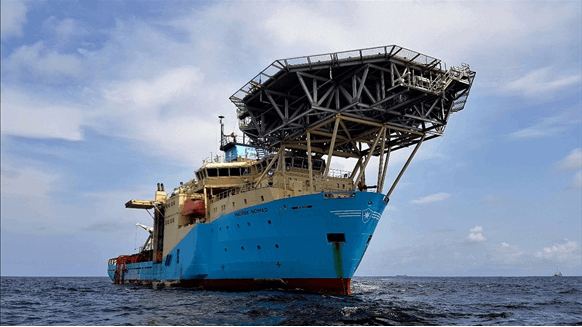 ExxonMobil has hired Maersk Nomad on a 1-year deal for its activities offshore Guyana.

Energy major ExxonMobil has turned to Maersk Supply Service for the deployment of the latter’s Subsea Support Vessel (SSV) offshore Guyana. Maersk Nomad has been contracted for a minimum of one year to support ExxonMobil’s field development activities offshore Guyana.

Maersk Nomad will be operating with two ROVs onboard, providing general and subsea support scopes for ExxonMobil’s six ultra-deepwater drillships currently operating offshore Guyana in the Stabroek Block. All are expected to continue operating for the foreseeable future.

“This is a great milestone for Maersk Supply Service, as we expand our operations and offering in Latin America. We now look forward to building a positive relationship with ExxonMobil offshore Guyana, and to build on Maersk Nomad’s strong track record of delivering long-term contracts offshore Angola for ExxonMobil’s local affiliate,” says Rafael Thome, Managing Director for Maersk Supply Service in Brazil and Latin America.

The first charter is expected to commence in mid-November 2022, out of Georgetown, Guyana.

Near the end of October, 2022, ExxonMobil made discoveries at the Sailfin-1 and Yarrow-1 wells in the Stabroek block offshore Guyana, adding to its extensive portfolio of development opportunities. The company has made more than 30 discoveries in the block since 2015, and it has ramped up offshore development and production at a pace that far exceeds the industry average.

ExxonMobil’s first two sanctioned offshore Guyana projects, Liza Phase 1 and Liza Phase 2, are now producing above design capacity and achieved an average of nearly 360,000 barrels of oil per day in the third quarter. A third project, Payara, is expected to start up by the end of 2023, and a fourth project, Yellowtail, is expected to start up in 2025.

ExxonMobil is currently pursuing environmental authorization for a fifth project, Uaru. By the end of the decade, ExxonMobil expects Guyana’s oil production capacity to be more than one million barrels a day.