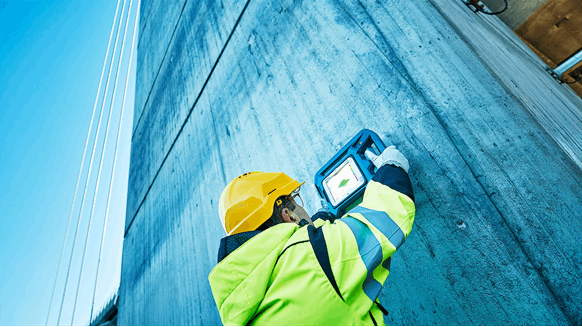 Equinor has become the first oil and gas operator to utilize a rolling ultrasound scanner to reveal the internal state of concrete structures that are part of offshore platforms.

Norwegian oil major Equinor has become the first oil and gas operator to utilize a rolling ultrasound scanner to reveal the internal state of concrete structures that are part of offshore platforms.

The operation was performed at one of Equinor’s platforms on the Norwegian continental shelf. It is part of Equinor’s strategy to increase the effectiveness, and speed of testing by using non-destructive techniques, increasing inspection scope, and having thorough inspections.

“Equinor was very pleased with the scanning operation and the valuable insight it has provided. Being able to view deeper into concrete material is an enabler to increase safety, confirm the integrity, and if possible, extend the lifetime of existing offshore platforms”, says Emir Evlic, interim CEO and head of sales at Elop Technology.

The scanning operation was conducted by Linjebygg, who performs inspection and maintenance works for Equinor on the Norwegian continental shelf.

Linjebygg utilized the Elop Insight, which is the world’s first rolling ultrasound scanner for the inspection of concrete infrastructure, to execute the scanning operation. Norwegian technology company Elop Technology has developed a scanner that can accurately reveal the internal state of concrete structures.

“The knowledge gained from the operation was very good. We could clearly see the tendon ducts under the heavy reinforcement, in some places even two layers,” says Terje Ertvaag, Senior Engineer at Linjebygg.

The rolling Elop Insight ultrasound scanner helps to identify issues that owners of concrete infrastructure must address. It is designed to quickly inspect and assess large surface areas. The live 3D visualization of the concrete structure on the scanner screen, provides a real-time interpretation of the concrete’s internal state, including elements and defects such as cracks, air pockets, voids, delamination, and rebars.

“Although our scanning technology has been used extensively on land, this is the first time it has been applied on an offshore platform. Still, it’s the same principles that apply. Instead of using a point scanner, we utilize a rolling ultrasound scanner which allows much quicker scanning of large surface areas,” added Evlic.