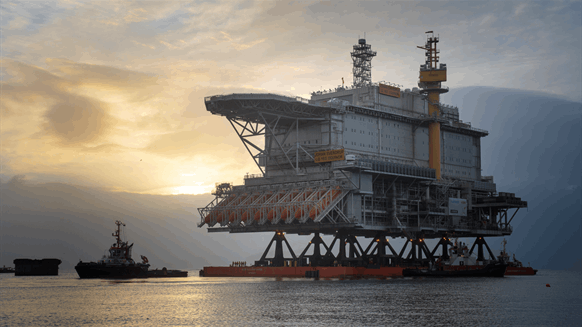 Equinor has awarded TechnipFMC a subsea contract for the Johan Sverdrup Phase 2 development in the Norwegian sector of the North Sea at a 394-foot (120-meter) water depth, TechnipFMC reported Wednesday.

TechnipFMC stated that the contract calls for delivering and installing the development’s subsea production system, which includes integrated template structures, manifolds, tie-in and controls equipment. The company did not specify the contract amount but stated that it is “significant” and ranges between $75 million and $250 million.

“We have collaborated closely with Equinor establishing a Strategic Collaboration Agreement in 2018,” Arnaud Pieton, president of TechnipFMC’s Subsea unit, said in his firm’s written statement. “This joint engagement is leading to further value creation for both of us and for Equinor’s Johan Sverdrup Phase 2 Development. It reaches beyond the supply of subsea equipment, now encompassing its installation.”

In a separate written statement Wednesday, Equinor noted that the Phase 2 production system comprises five templates and 18 x-mas trees with associated components. The company also anticipates Phase 1 of the field to start up in November of this year, with production from Phase 2 set to begin during the fourth quarter of 2022. Equinor’s Johan Sverdrup partners include Aker BP, Lundin Norway, Petoro and Total.

“This is an important milestone for the Johan Sverdrup development,” Trond Bokn, Equinor’s senior vice president for the Johan Sverdrup development, stated regarding the Phase 2 subsea contract. “We have now determined the subsea solution for both phase 1 and 2 of the field development, and TechnipFMC has been given the responsibility for both jobs. This gives us a good starting point for accelerating the collaboration on safety, efficiency improvement, simplification and technology development.”

In related Johan Sverdrup news, KBR, Inc. reported Wednesday that the utilities and living quarters (ULQ) platform topsides for the field development has reached the sail-away phase. KBR and Kvaerner – via their K2JV joint venture – shared the engineering, procurement and construction contract for the complete delivery of the ULQ platform topsides.

In a separate written statement from March 15, Kvaerner noted that its Pioneering Spirit heavy lift vessel is transporting the ULQ platform from its facility in Stord, Norway to the Johan Sverdrup field on the Norwegian continental shelf. In addition to boasting an advanced control room and various systems to operate the entire Johan Sverdrup field, the ULQ platform features a 560-bed accommodation module, Kvaerner added.