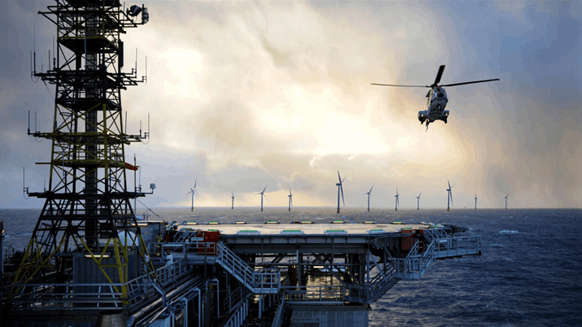 A rendering of the Hywind Tampen floating wind farm between the Gullfaks and Snorre licenses in the North Sea. Illustration copyright Equinor AS

“Hywind Tampen is a pioneering project and a central contribution to reducing emissions from Gullfaks and Snorre, and I am pleased that both ESA and Norwegian authorities have approved the project,” Arne Sigve Nylund, Equinor’s executive vice president for Development and Production Norway, commented in a written statement emailed to Rigzone.

According to Equinor, the nearly NOK 5 billion (approximately US$488 million) Hywind Tampen investment calls for installing 11 wind turbines between the two Snorre (Snorre A and B) and three Gullfaks (Gullfaks A, B and C) platforms. The company noted the wind turbines – installed in water depths ranging from 853 to 934 feet (260 to 300 meters) – will boast a total capacity of 88 megawatts and will meet approximately 35 percent of the five platforms’ annual power demand.

Enova SF, a unit of Norway’s Ministry of Climate and Environment, is contributing up to NOK 2.3 billion (approximately US$224 million) of funding for Hywind Tampen, Equinor stated. Moreover, Equinor noted the Norwegian business sector’s NOx Fund will provide up to NOK 566 million (approximately US$55 million). Others joining Equinor in Hywind Tampen include the company’s Gullfaks partners – Petoro AS and OMV (Norge) AS – and Snorre partners – Idemitsu Petroleum Norge AS, Wintershall DEA Norge AS and Var Energi AS.

“On behalf of the partners, Equinor has awarded contracts totaling NOK 3.4 billion, subject to final project approval by Norwegian authorities,” remarked Anders Opedal, Equinor’s executive vice president for technology, projects and drilling. “It is a plus that the oil and gas industry is competitive in renewables projects as well and the contracts will lead to considerable spinoff effects in Norway.

Equinor contends the project, which will reduce gas turbine usage on the Gullfaks and Snorre platforms, will reduce carbon dioxide emissions by more than 200,000 tonnes per year.

“As the whole industry is currently experiencing much uncertainty, it is vital that we progress projects that spur technology development in the renewables segment and create spinoff effects on the Norwegian supplier industry,” stated Opedal.

“We are experiencing very challenging times, and we are focusing on continuing our transition effort while attending to and developing the value on the Norwegian continental shelf and at the same time reducing the climate footprint from our operations,” noted Nylund.

Equinor stated that it anticipates a late-2022 start-up for Hywind Tampen.