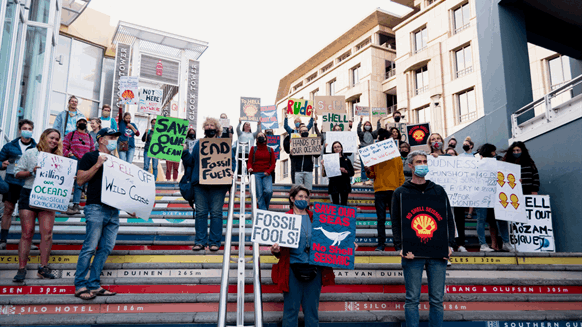 Around 200 environmental activists gathered to protest the arrival of seismic acquisition vessel Amazon Warrior in Cape Town harbor ahead of starting a survey campaign for Shell.

Around 200 environmental activists gathered on Sunday morning to protest the arrival of seismic acquisition vessel Amazon Warrior in Cape Town harbor ahead of starting a five-month seismic survey campaign for Shell.

Shell’s survey will be conducted off the East Coast of South Africa under an approved Environmental Management Program (EMPr) back from 2013.

“We were expecting a small contingent of about fifteen or so people to show up to protest against this ship, commissioned by Shell to conduct seismic testing off the Wild Coast, but these numbers, this early on a precious Sunday morning, demonstrates that people are adamant that they want change,” The Strategic Lead of environmental organization Green Connection, Liziwe McDaid said.

“No meaningful public participation is needed, yet the seismic survey will have an impact on marine life and subsequently could impact the lives and livelihoods of the fisher communities who depend on the ocean’s resources. How can our government allow a corporation to do this without any accountability?” McDaid added.

“It is also quite appropriate that today (November 21) is World Fisheries Day because we have a strong message for the Shell Corporation: Stop messing up our planet!”

“By causing harm to the ocean, the knock-on effect is that the livelihoods of our small-scale fishing communities could be affected. The time has come to completely change your business model because fossil fuels are the past and only enriching a few, while climate change is real and harming nature as well as the thousands of people who depend on a healthy environment for their livelihoods,” she claimed.

Green Connection added that it was particularly concerned about the timing of the survey since it is scheduled to take place during the migration season for hump-backed whales and could also endanger juvenile turtles coming down the coast in the Agulhas current.

It is worth noting that Shell’s own 2013 EMPr states that that the company should try to “avoid surveying during December when humpback whales may still be moving through the area on their return migrations.”

Regardless of that, Shell hired Shearwater Geoservices to carry out the 3D seismic survey within its Transkei Exploration Area from December 1, 2021, using the Amazon Warrior seismic vessel. Following the survey, Shell will assess the area for potential exploratory drilling.

“This is a time for these corporations to shift from being fossil fools to working with the people to move forward to a just transition to renewable energy sources,” McDaid concluded.